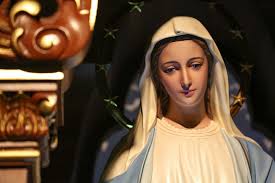 2. Immaculate Conception — The 1854 dogma issued by Pope Pius IX refers to Mary's sinless nature at the moment of being conceived by her parents. The Immaculate Conception was the first time a pope claimed a dogma to be infallible, even though the idea of papal infallibility would not be officially proclaimed for another 16 years. This is the definitive title of the Blessed Mother.
Posted by Province of Meribah at Sunday, September 20, 2020