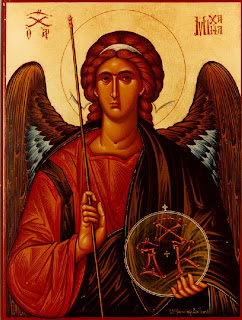 The feast of Sts. Michael, Gabriel and Raphael have been combined since the fifth century.
Saint Michael is one of the seven archangels that include Gabriel, Raphael, Uriel, Jehudiel, Beraquiel and Sealtiel. As an archangel, he was known as the protector of Israel and the Church and presents our prayers to the Most High. He is mentioned several times in the Sacred Scriptures . We also read in the Book of Revelation about the battle between the good angels and the devils which were led by Lucifer. So it was also Saint Michael who was at the head of the angels in the battle against the devils and the head of the Guardian Angels. The meaning of the name, Michael, in Hebrew is, ‘Who is like God.’

Saint Gabriel is one of the three archangels whom the Bible calls by name. He is called the messenger of redemption, six hundred years before the coming of Jesus, the time when Christ would be born. In the New Testament, he appeared to Zechariah, the father of St. John the Baptist, in order to give the news of the pregnancy of his wife, Saint Elizabeth. But when Zechariah doubted, St. Gabriel said: “I am Gabriel, who stand before God, I was sent to speak to you and to announce to you this good news. But now you will be speechless and unable to talk until the day these things take place, because you did not believe my words which will be fulfilled at their proper time."

Saint Gabriel also sent by God to the Blessed Virgin Mary to announce the Good News of the incarnation of the Son of God, Jesus Christ. He said: “Hail, favored one! The Lord is with you…. Do not be afraid Mary, for you have found favored with God. Behold, you will conceive in your womb and bear a son and you name him, Jesus…."

Saint Raphael which means “medicine of God” is one of the seven archangels who always stand before the Lord. His mission is connected with the story of Tobias that according to Scriptures, he was sent by God in order to help the family of Tobias. Tobias was healed of his blindness and took care of him on his journey, the one who owed him was asked to pay and he was given a young wife. He was considered as the patron saint of the blind, nurses, physicians and travellers.

Hence the name, ‘angel,’ has been appropriated to them. The angels are all pure spirits, that is, they are uncompounded immaterial substances which have no parts as bodies and matter, have. In them nothing is to be found of color, shape, extension or any other qualities of matter. They possess superior intelligence, enormous strength and surpassing holiness. They enjoy an intimate relationship with God. They are, by a property of their nature, immortal as every spirit is.

Anyone who needs special means of support should know whom to call upon. In times of temptation, have recourse to Saint Michael and let us pray these words: “Saint Michael, protect us from all temptations of the devil and wickedness.” Let us imitate the promptness of Saint Gabriel in fulfilling the will of God and in sickness or necessity, let us invoke the intercession of Saint Raphael.
Posted by Province of Meribah at Tuesday, September 29, 2020