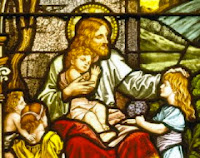 They came to Capernaum and, once inside the house,
he began to ask them,
"What were you arguing about on the way?"
But they remained silent.
They had been discussing among themselves on the way
who was the greatest.
Then he sat down, called the Twelve, and said to them,
"If anyone wishes to be first,
he shall be the last of all and the servant of all."
Taking a child, he placed it in the their midst,
and putting his arms around it, he said to them,
"Whoever receives one child such as this in my name, receives me;
and whoever receives me,
receives not me but the One who sent me."

Jesus confronted his disciples about their argument over who among them was His favorite — er, the greatest. He made a statement and then gave an example.

The statement was, “If anyone wishes to be first, he shall be the last of all and servant of all.” And for the example, Jesus called over a child who lived in that house, took the child in his arms, and said, “Whoever receives one child such as this in my name, receives me.”

We probably don’t have too much trouble understanding the statement, but without knowing something of those times, we may miss altogether the point of the example.

In that culture, children were essentially non-persons. They were left with the women, who themselves were considered subservient to the men, but children were even further down the social ladder. Only slaves were lower in social standing than children.

And as if to reinforce the insignificance of children, Mark doesn’t even identify the gender of the child. The Greek word he uses is paidion, which like the English word “child” into which it is translated, is neuter. Thus, the account says that Jesus “took a little child and put it among them."

You can’t get much more impersonal than “it.”

Thus, to say that the followers of Jesus could welcome him by welcoming a child was a mind-blowing suggestion. But Jesus wanted them to understand how God viewed greatness. It came not from being high on society’s status ladder, but by welcoming those on the bottom rungs or those who don’t have a place on the ladder at all.

“Greatness” is a word based on measurement. In our usual way of thinking, a person can be designated great only if he or she excels in some way beyond others, is more than others.

For us to be called great would mean that there are others who do not measure up to our status or achievement, and who are therefore less than we are. Jesus was not taking issue with the idea of measurement to determine greatness; he was simply saying that the disciples were measuring in the wrong direction. True greatness is not from how far we rise above others in status or fame or achievement, but in how far we are willing to go in including and caring for the least and the lowly in his name.
Posted by Province of Meribah at Friday, September 25, 2020