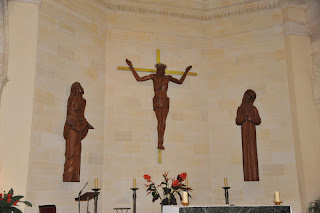 Blessed William Joseph Chaminade, founder of the Marianists, encouraged his spiritual followers to interrupt at three o'clock all professional activities and to pause for contemplation. One of the earliest texts (Regulations for the Religious of Mary, 1819) defines this spiritual practice as follows: Every day at three o'clock in the afternoon each one makes a short prayer, each one remains standing wherever he may be; only on Friday does he kneel.
The classical form of the Three O'Clock Prayer was fashioned by Father Simler for the 1885 edition of the "Marianist Prayer Book". For practical reasons, the prayer was shortened and the exact time no longer strictly observed. A special invocation to St. John was added and spiritual identification with the apostle as patron and model was encouraged.

Beginning in 1857, efforts were made to acquaint Marianist students with the three o'clock devotion. This venture, although blessed with modest success, shows that Chaminade's followers were eager to share with others what was dear to their own hearts. The suggestion of the 1928 General Chapter of the Society of Mary, to print the Three O'Clock Prayer on the back of holy cards and to distribute them in classrooms and elsewhere, illustrates a long- standing tradition which until this day has not been interrupted.

The Three O'Clock Prayer first began as a daily spiritual reunion for the dispersed members of the Sodality, and, even today, it is still considered a spiritual reunion of all members of the Family of Mary. Marianists gather at three o'clock to express communion with Mary and the beloved disciple so closely united with Jesus on the Cross. They also gather with other members of the Family of Mary around the world. The Three O'Clock Prayer strengthens the solidarity of those who share in the Hour of Jesus and the Hour of the Woman, meaning in the glorification of Jesus Christ and the entrusting of his ongoing mission to Mary-Church. The Three O'Clock Prayer speaks to apostles and spirituals, to pragmatists and intellectuals.
Posted by Province of Meribah at Saturday, September 26, 2020