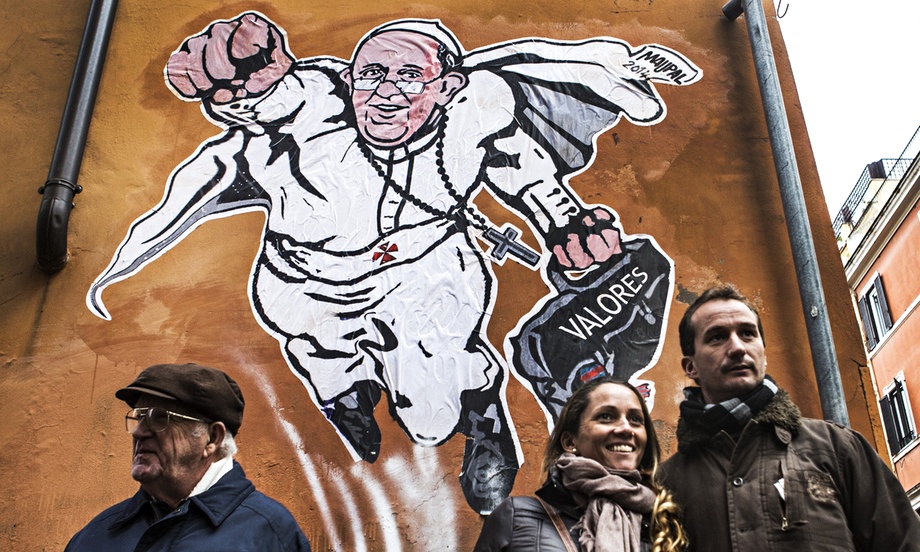 From The Wall Street Journal:
Mauro Pallotta, a Rome-based street artist, was reading a Superman comic strip while watching a TV documentary on the pontiff when he had an idea. Why not create a mural of Pope Francis as a superhero?

So on a cold night last January, the 42-year-old who goes by the pseudonym MauPal, sneaked out to put an image of the pope up on a wall next to the Vatican, while his girlfriend kept watch. The mural showing a flying pope dressed in his white cassock with his fist raised a la Superman was an instant hit. The Vatican even tweeted an image of it.

Within 48 hours, Rome authorities removed MauPal's mural, but the work became the best-known example of a burgeoning trend of street artists taking inspiration from the pope.

“He is our superhero,” said MauPal, who created papal murals in other cities and gave the pontiff a small wooden tablet with the drawing of the superpope mural during a general audience in February.

Another painting by an anonymous artist – this time depicting a smiling Pope Francis on a bicycle riding towards viewer – went up near the Vatican within days, as has a papal mural in the pope’s native Buenos Aires. This summer, a black-and-white graffito signed by British street artist Banksy of a waving Pope Francis riding a Vespa popped up on the main boulevard leading to St. Peter’s Basilica.

The popularity of Pope Francis as a subject for street art has a certain irony. In Renaissance time, popes commissioned great artists, such as Raphael, Sandro Botticelli and Titian, to paint their portraits. By contrast, murals are considered the poorest form of art, often thumbing its nose at the establishment and seeking to free art from the confines of museums.

“Pope Francis is perfect as a subject for an art that was born for the average person,” says Stefano Antonelli, of Roman gallery 999Contemporary, which specializes in street art. “He is one of us.”
Posted by Province of Meribah at Sunday, September 06, 2020