"What is the cross that he wants me to carry for his love?” 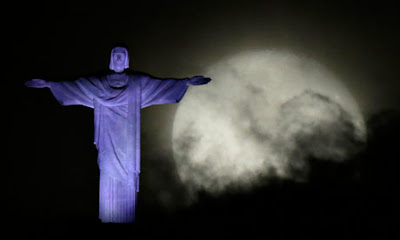 A young man in a wheel chair asked three and a half million people to ask themselves that question as silence came over Copacabana.

Rio de Janeiro, Brazil, Jul 27, 2013 / 07:50 pm (CNA/EWTN News).- The young Brazilian Felipe Passos moved the hearts of three million World Youth Day participants, including Pope Francis himself, when he told the story of how he became bound to a wheelchair and discovered “the Cross.”

He told how at the end of the past World Youth Day, held in Madrid in 2011, he made two spiritual promises. He promised to stay chaste until marriage and to work hard so his prayer group of Ponta Grossa, in Brazil’s southern state of Paraná, could participate in this year’s World Youth Day in Rio de Janeiro.


With few resources, Felipe and his friends began saving money by working several hard jobs at the same time that they prepared themselves spiritually: praying, adoring the Blessed Sacrament, fasting and doing works of solidarity.

Then a horrible thing happened.

“In January of this year, two days before turning 23, two youths entered my house, armed, to rob the money we had gathered with so much sacrifice,” said Felipe.

“I thought of the months of great efforts, of my family’s sacrificing, of my friends and colleagues… in what would have been snatched from us and I decided I would not give it,” he added July 27.
Felipe saved the savings of the group, but received a gunshot wound that almost ended his life.

“I was clinically dead, I had several cardiac arrests, and the doctor told my parents in the hospital ‘this boy has no hope,’ but I’m here and my community is here because of God’s mercy,” remarked Felipe.
In front of a shocked crowd and in front of Pope Francis, who looked at him attentively, the Brazilian told how he was in coma, breathing through a tube, while his community offered prayer intentions and sacrifices so he would heal.

Finally, when he became conscience, the first thing he did was ask for the Eucharist and after receiving it, he recovered rapidly.

But Felipe, who was then bound to a wheelchair, stated “this is my cross, the cross the Lord sent me to come closer to him, to live more openly his grace and love.”

When the three million youths broke out clapping, Felipe interrupted them.
“Silence!” he said. “Let’s listen to the Holy Spirit!”

The 23-year-old then asked each of the youths present to take the cross they had hung around their neck, to hold it and look at it.

When the Holy Father said earlier that he wanted youth to stir things up, he scared people not accustomed to such language from the Pope. The Pope wasn't calling for anarchy, but the commotion of the Holy Spirit. He was calling young people - and the young at heart - to stir into flame the Living Flame of Love in their heart. Stir up the embers of our faith into flame - that all may see. To go out into the marketplace, as Pope Benedict might say.

He is saying nothing new - simply speaking, calling in a new way. Others have done the same. The Holy Father points directly to St. Francis - who didn't set out to start an order but set out to serve those most in need, to share his faith and make love known and loved.