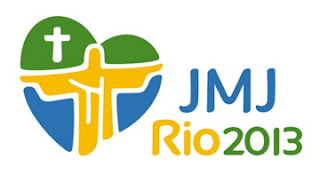 Over one hundred Marianist high school students will be off to World Youth Day!

This opportunity offers our young people profound moments to experience and deepen Christian piety and devotion. The ceremonies of the Way of the Cross during each World Youth Day take place on the Friday evening of World Youth Day week and are televised throughout the world. The Stations of the Cross presentations in Toronto (2002), Sydney (2008) and Madrid (2011) were spectacles for the world and offered a provocative witness of the Christian story in the heart of three great cities of the world.

The Rio Stations of the Cross speak of the suffering of Jesus as expressed in the youth of today. The route taken by Jesus in the city of Jerusalem will be recreated in the Stations of the Cross on July 26 in the setting of Rio de Janeiro, such as at the Rock of Arpoador and the Selarón Staircase in Lapa. There will be 14 stations, with 13 of them set along 900 meters of the central median of Atlantic Avenue and the final at the central stage, where Pope Francis will be. The cast will consist of 280 volunteers who will enact the stations throughout the approximately 1 hour and 15 minute procession.

Each of the stations will relate to one of the questions facing youth in the modern world: missionary youth; converted youth; youth in recovering communities; youth speaking in the name of mothers; seminarians; Religious fighting for life; couples; youth speaking for women who suffer; students; youth in social networks; youth in prison or prison ministry; youth with terminal illness; deaf youth; youth of Africa, North America, Latin America and the Caribbean, Europe, Asia and Oceania.

“The Stations of the Cross is designed to speak to young people, just as the story of this route of suffering of Christ speaks today to the difficulties young people face. It‚s a Stations of the Cross that has a message of solidarity. It‚s not just about speaking to these issues, but about calling on the spirit of youth to act together in Christ,” said artistic director Ravel Cabral. Transmission via large screens will make the events easily visible to all participants.

Pope Francis will preside at the main stage. Besides the staging at the other 13 stations, there will also be a representation of all that is happening in the other stations on the main stage. “The idea is that the Holy Father will participate in a real way with everything that is happening in each of scenes,” explained the general director Ulysses Cruz.
Posted by Province of Meribah at Sunday, July 14, 2013