Saint Benedict, pray for us. 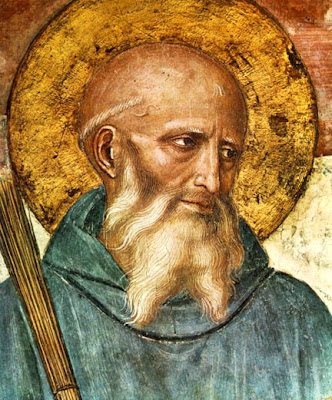 Today we celebrate the Feast of St. Benedict.

Resolutions were a part of the culture or practice of St. Benedict in the sixth century, a passage in his Rule for Monasteries would make a good resolution:


“Clothed with faith and the performance of good works, let us set out on the Lord’s paths, with the Gospel for our guide, that we may deserve to see him who has called us to his kingdom” (Prologue, 21).

The Bible gives a choice between two paths, the way of the just and the way of the wicked (Psalm 1). Here the Lord’s way is in the plural, which is also biblical: "Make known to me your ways, Lord, teach me your paths" (Psalm 25:4). When St. Benedict uses the plural, he may be implying that following the way of the Lord isn’t as simple as getting on a track and setting an automatic pilot or cruise control, but that there are choices all year between good and bad paths.

Note that St. Benedict doesn’t say we should set out on our own paths.

We are setting out on a journey that leads to the kingdom of God. This requires a new beginning every day. And if we use the Gospel for our guide and "keep our eyes fixed on Jesus,"cooperating with God’s grace by clothing ourselves with faith and putting the grace into practice in good deeds, our paths will not be just a sightseeing tour but a pilgrimage taking us to God.
Posted by Province of Meribah at Thursday, July 11, 2013