H/T to Sandro Magister: How Benedict XVI Has Innovated the WYD 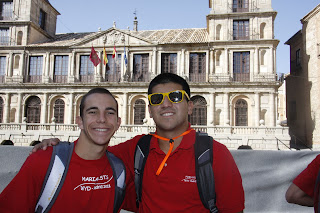 There are at least three innovations that characterize the World Youth Days with this pope: moments of silence, the very young age of the participants, the passion to witness to faith in the world.
"Oggi vorrei riandare brevemente con il pensiero..." 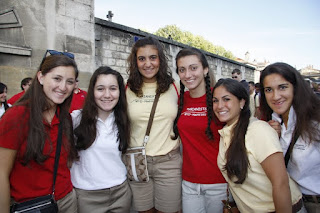 From this and from his previous reflections, it is evident that Benedict XVI sees the World Youth Days as a salient moment of his mission as successor of Peter.
To simple outside observation, these worldwide gatherings also demonstrate distinctive characteristics, which were especially visible in Madrid.
The first is silence. A prolonged, very intense silence that breaks out at key moments, in a throng of young people that had been exploding with celebration just a moment before. 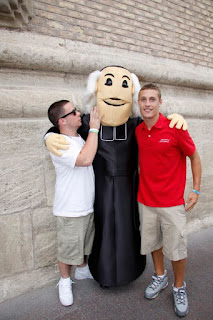 The Via Crucis is one of these moments. Another, even more striking, is that of the adoration of the sacred host during the nighttime vigil. A third is that of communion during the concluding Mass.
Silent adoration of the sacred host is an innovation introduced into the World Youth Days by Benedict XVI. The pope kneels down, and with him hundreds of thousands of young people kneel down on the bare ground. All of them kneeling not to the pope, but to that "our daily bread" who is Jesus.
The violent stormy downpour in Madrid that preceded Eucharistic adoration made the silence even more striking. And the same thing happened the following morning, at the Mass. The unexpected cancellation of of the distribution of communion – for unexplained reasons of security – did not produce disorder and distraction in the endless expanse of young people, but on the contrary a silence of surprising composure and intensity, a mass "spiritual communion" with no known precedent.
A second distinctive characteristic of this last World Youth Day is the very low average age of the participants, 22.
This means that many of them were taking part in it for the first time. Their pope is Benedict XV, not John Paul II, whom they knew only as children. They are part of a generation of young and very young people highly exposed to a secularized culture. But at the same time, they are the signal that the questions about God and ultimate destinies are alive and present in this generation as well. And what motivates these young people is precisely these questions, to which a pope like Benedict XVI offers answers that are simple, yet powerfully demanding and attractive.
The veterans of the World Youth Days were there, in Madrid. But above all among the tens of thousands of volunteers who assisted with the organization. Or among the numerous priests and religious who accompanied the young people, whose vocations germinated during previous World Youth Days. It has been clearly shown that these gatherings are an incubator for the future leadership of Catholic communities around the world.
A third distinctive characteristic is the projection of these young people "ad extra." They don't have any interest in the battles within the Church to bring it into step with the times. They are light years away from the "cahier de doléances" of some of their older brothers: for married priests, for women priests, for communion for the divorced and remarried, for the popular election of bishops, for democracy in the Church, etcetera etcetera.
For them, all of this is irrelevant. It is enough for them to be Catholics as Pope Benedict shows and explains to them. Without diversions, without concessions. If we were saved at a high price – the blood of Christ – we must reach just as high in giving our lives as true Christians.
It is not the internal reorganization of the Church, but passion for the evangelization of the world that motivates these young people. The pope was about to say as much to them in these words, in the speech interrupted by the storm: 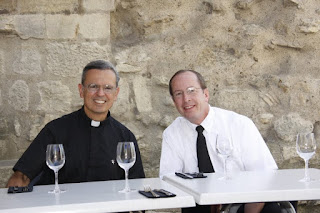 "Dear friends, may no adversity paralyze you. Be afraid neither of the world, nor of the future, nor of your weakness. The Lord has allowed you to live in this moment of history so that, by your faith, his name will continue to resound throughout the world."
The American vaticanista John L. Allen has called the young people who gathered in Madrid "Evangelical Catholics"
Posted by Province of Meribah at Friday, August 26, 2011