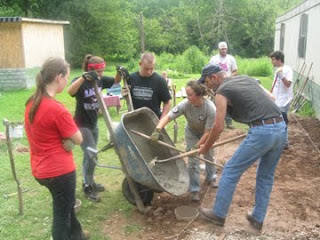 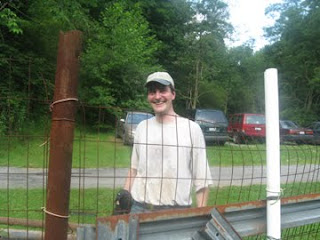 (Bro. Peter tarvels to his next work site above)
During the week, students and chaperones lived in community with the staff of Nazareth Farm as they learned about the Four Cornerstones of Prayer, Service, Simplicity and Community. Students led morning and evening prayer experiences and throughout the day, each activity was begun with a prayer. Mass was celebrated on Monday and on Friday (for the Solemnity of the Assumption.) 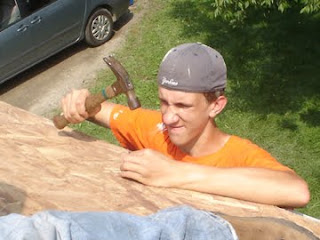 (Luke Homer sees fixing a roof takes hard work, but sweat and determination is also involved.)
Each day work crews consisting of students and chaperones from each of the different volunteer groups went off in different directions to work. Projects included painting a house; replacing two roofs, installing two decks on a trailer home, and various chores around the farm. The students also learned much about proper stewardship of God’s creation through conservation of food, water, and electricity. 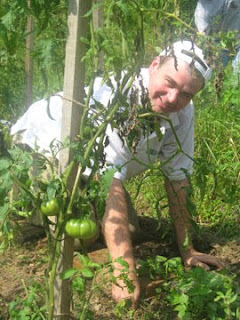 (Father James assists in gardening above)
All lived simply during the week, using outdoor “bucket showers” and fasting from TV, IPODS, phones, etc. Chaminade’s group stopped at Baltimore on the way down and Philadelphia on the way back. They returned to Chaminade on August 16, fatigued but satisfied with a profound experience of prayer, simplicity, community and service. 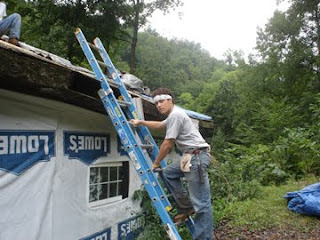 (Eddie Parisi recognizes that climbing a ladder is all in a day's work)
Posted by Province of Meribah at Sunday, August 23, 2009