Pope Benedict in his homily on the Assumption stressed that our lives should be marked by this "sacred haste" in the knowledge that "God is always the priority," and no other priority should create such haste in our lives.
Moreover he pointed to the passage from the gospel where Saint Luke “tells us that Mary, after the annunciation, 'got up and went quickly towards the mountainous region' to visit Elizabeth (Luke 1, 39). The evangelist - he continued - wants to stress that for Mary to follow her vocation, in docility to the Spirit of God, who has brought about in her the Incarnation of the Word, she must embark upon a new road and travel outside her home, allowing herself to be led by God alone". 'It is a journey - he continued - in which Mary, conserving and meditating upon the events of her existence in her heart, sees in them, in an ever deepening way, the mysterious plan of God the Father for the salvation of the world. "
Today we commemorate the 26th anniversary of Brother Thomas' first profession of vows. We also commemorate the 30th anniversary of ordination of Father Albert. 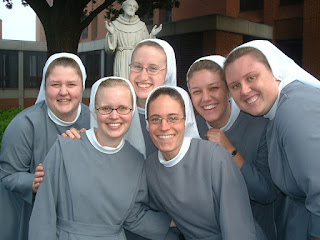 And finally in Alton, Illinois a Marianist graduate professed her first vows as a member of the Sisters of St. Francis of the Martyr St. George. Sister M. Paulina graduated from Kellenberg Memorial High School.

May the Father and the Son and the Holy Spirit be glorified in all places through the Immaculate Virgin May.
Posted by Province of Meribah at Saturday, August 15, 2009