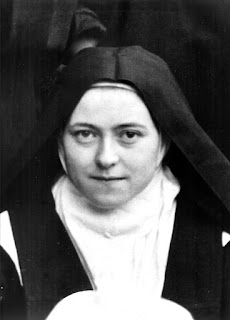 What a tremendous gift we have in St. Therese of Lisieux!
She is a stellar example of God’s love in action. She is a powerful example of how much God values each and every one of us. All of us have a place in salvation history, there are no exceptions.
Therese had a holy family! Her parents had considered entering into religious life, but it was through their marriage vocation that the world would come to know of the Martin Family. When her father Louis met her mother Zelie he was a thirty-four year old watchmaker, and she was a successful businesswoman making lace. They married in 1858, and were very devoted to the Eucharist. Saint Therese was one of nine children. Two brothers and a sister died in infancy, and her sister Helene died at the age of five.The Martins lived an exemplary Catholic life. Therese's mother was a Third Order Franciscan. Therese and her four surviving sisters all entered into religious life. Four entered Carmel at Lisieux, and one entered the Visitation Convent.

On this very day, we are reminded of the following writings of St. Therese ;
“He wants me to love Him because He has forgiven me, not much, but everything. He did not wait for me to love Him with a great love, like Magdalene’s, but made me see that He had loved me first, with an infinite providence, so that now I may love Him in return even unto folly.”
Posted by Province of Meribah at Thursday, October 01, 2009