Patron Saint of the Elderly Canonized

Saint Jeanne Jugan
Foundress of the Little Sisters of the Poor

Jeanne Jugan in her youth became a servant and friend of a woman she met through a third order. They prayed, visited the poor and taught catechism to children. After her friend's death, Jeanne and two other women continued a similar life in the city of Saint-Sevran.

In 1839, they brought in their first permanent guest. They began an association, received more members and more guests. Mother Marie of the Cross, as Jeanne was now known, founded six more houses for the elderly by the end of 1849, all staffed by members of her association—the Little Sisters of the Poor. By 1853 the association numbered 500 and had houses as far away as England. 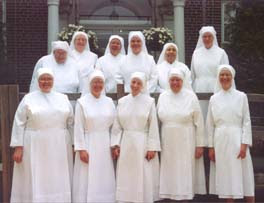 By the time Pope Leo XIII gave her final approval to the community's constitutions in 1879, there were 2,400 Little Sisters of the Poor. Jeanne died later that same year, on August 30. Her cause was introduced in Rome in 1970, and she was beatified in 1982 and canonized in 2009.
Posted by Province of Meribah at Saturday, October 10, 2009