A Saint on Fire 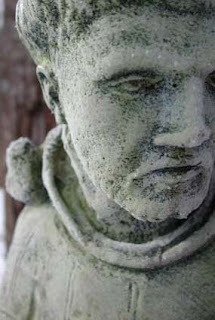 “Francis of Assisi is not for everyone. Even many saints would not be comfortable with Francis. He appeals primarily to the heart. He would never be accused of being lukewarm, for he lived his life afire. Francis found God in real life. He led a life of radical devotion to God and to service of other people, especially poor people.

Typically, Francis attracts the average person more than the scholar. Devotions popular with many Catholics are associated with Francis. The Christmas crib or Nativity scene, Stations of the Cross, the Stigmata, and the garden statues surrounded by birds and flowers, to name a few.
Francis found his inspiration in the Gospels. More precisely, he found it in the stories in which Jesus walked among the people of the streets and talked with equal ease to children, tax collectors, lepers, foreigners, and Pharisees. Francis experienced the good news in the flesh in poor people and in needy people, in fig trees and in mustard seeds, in sheep and in goats. In short, Francis practiced an incarnational, sacramental spirituality.
To say that Francis’ vision is sacramental means simply that he was always drawn to life, to the preciousness of the everyday. He shunned intellectualizing and instead looked for God in the flesh, in the earth, and in simple things. He preferred to pray with his feet, with his hands, and with his voice raised in song. Not only did Francis meditate on the suffering of Jesus, but he bore the wounds of Jesus in his very flesh when he received the stigmata.”
- excerpt from the book “Praying with Francis of Assisi”
Posted by Province of Meribah at Saturday, October 03, 2009