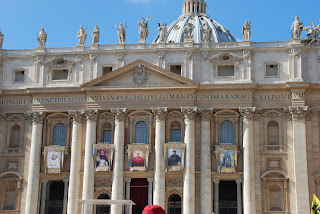 Last Sunday, the Holy Father canonized Saint Jeanne Jugan in St. Peters. She was the humble foundress of the Little Sisters of the Poor.

Born in northern France during the French Revolution—a time when congregations of women and men religious were being suppressed by the national government, Jeanne would eventually be highly praised in the French academy for her community's compassionate care of elderly poor people.

When Jeanne was three and a half years old, her father, a fisherman, was lost at sea. Her widowed mother was hard pressed to raise her eight children (four died young) alone. At the age of 15 or 16, Jeanne became a kitchen maid for a family that not only cared for its own members, but also served poor, elderly people nearby. Ten years later, Jeanne became a nurse at the hospital in Le Rosais. Soon thereafter she joined a third order group founded by St. John Eudes (August 19).

After six years she became a servant and friend of a woman she met through the third order. They prayed, visited the poor and taught catechism to children. After her friend's death, Jeanne and two other women continued a similar life in the city of Saint-Sevran. In 1839, they brought in their first permanent guest. They began an association, received more members and more guests. Mother Marie of the Cross, as Jeanne was now known, founded six more houses for the elderly by the end of 1849, all staffed by members of her association—the Little Sisters of the Poor. By 1853 the association numbered 500 and had houses as far away as England. 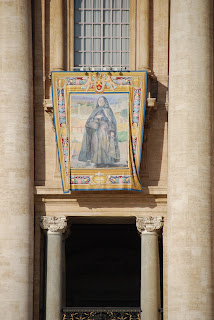 Abbé Le Pailleur, a chaplain, had prevented Jeanne's reelection as superior in 1843; nine year later, he had her assigned to duties within the congregation, but would not allow her to be recognized as its founder. He was removed from office by the Holy See in 1890.

By the time Pope Leo XIII gave her final approval to the community's constitutions in 1879, there were 2,400 Little Sisters of the Poor. Jeanne died later that same year, on August 30. Her cause was introduced in Rome in 1970, and she was beatified in 1982 and canonized Saint Jeanne Jugan on October 11.

Posted by Province of Meribah at Sunday, October 18, 2009