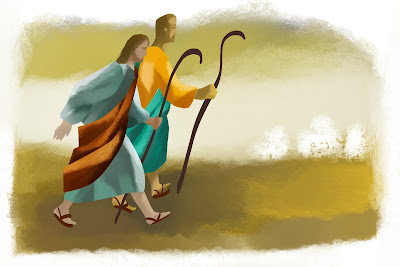 Jesus had a reason for the items he banned: They could undermine the mission on which He was sending his disciples. They were to depend on God to provide for them through the hospitality of strangers. How they traveled and were welcomed was to be itself a demonstration of God's care.

So, think about it, Jesus said that they were not to check any bags, and could only take one small carry-on. What a group they must have been! Peter's garments may have been too big for John. Phillip's clothes no doubt smelled differently than Andrew's. The attire of Matthew, the former tax collector, may have been more costly than James', the fisherman. Bartholomew's tunic may have had a rip that made it identifiable as his own. And maybe Thomas' wife was such a good seamstress that the clothing she made for him was easily distinguishable from what the other 11 disciples wore.

But what does this teach us? When Jesus sends us out to be his people in the world, and tells us to rely on him and thus take nothing with us, we can't help but take along who we actually are, including the "baggage" we normally carry. And by baggage, we mean something other than suitcases or parcels. That word is shorthand for burdensome personal history we drag with us that interferes with our living fully in the present.

When Jesus tells us to take nothing for the journey, He means it. It's an opportunity to leave our baggage behind.
Posted by Province of Meribah at Sunday, July 12, 2015