Ask for a servant's heart 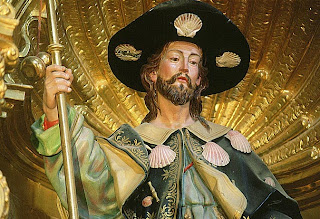 Saint James, Saint John, and their mother, from what we heard in today’s Gospel, approached Jesus with a terribly selfish request. They wanted positions of power and prestige in his kingdom- something that would place them head and shoulders over their friends and fellow Apostles.

It’s easy for us to cast stones at James and John. At the same time, however, most of us are probably guilty of having made selfish requests of God ourselves. In a sense, then, it’s kind of nice to know that people who eventually became saints did exactly the same thing.

It’s even nicer to know, however, they with God’s grace they were able to move beyond their selfishness. The lives of James and John show us that as our relationship with God matures, selfishness is replaced by service - a desire to serve Jesus, who himself came not to be served, but to serve, and give his life as a ransom for many. For his part, St. James - whose feast we celebrate today - did indeed achieve that greatness he desired. But he did so only through service - by drinking the chalice of Jesus, and giving his life for him.

Today is an opportunity for us to assess the state of our relationship with the Lord. Are we selfish, or servants? If all we’re asking for is "What can I get?" perhaps we should ask for one more thing: A servant’s heart.
Posted by Province of Meribah at Saturday, July 25, 2015