The Cross is the mystery of God's love

In his homily yesterday, the Pope said Christianity does not exist without the Cross and stressed that we are unable to free ourselves from our sins on our own. The Cross, he said, is not an ornament to place on the altar but is the mystery of God’s love who takes our sins upon himself. He then reflected on the meaning of Jesus’s warning to the Pharisees “You will die in your sin.” 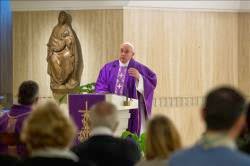 “It is impossible for us to free ourselves from sin on our own. It’s impossible. These doctors of the law, these people who taught the law, didn’t have a clear idea on this. They believed, yes, in the forgiveness of God but considered themselves strong, self-sufficient and that they knew everything. And in the end they transformed religion, their adoration of God, into a culture with values, reflections, certain commandments of conduct to be polite and they believed, yes, that the Lord can pardon them, they knew this but they were far removed from all this.”

Pope Francis said the serpent is the symbol of sin as seen in the bible. In the desert sin was lifted up but it is a sin that seeks salvation so that it heals. It is Jesus, the Son of Man, the true savior, who is lifted up.

“Christianity is not a philosophical doctrine, it’s not a programme for life survival or education, or for peacemaking. These are consequences. Christianity is a person, a person raised on the Cross, a person who annihilated himself to save us, who became sin. Just as sin was raised up in the desert, here God who was made man and made sin for us was raised up. All our sins were there. You cannot understand Christianity without understanding this profound humiliation of the Son of God who humbled himself and became a servant unto death, even death on a cross, in order to serve us.”

This is why, the Pope went on, the apostle Paul said we do not have other things to boast about, apart from our sins, and this is our misery. But through the mercy of God, we rejoice in the crucified Christ. It’s for this reason that ‘there is no Christianity without the Cross and there’s no Cross without Jesus Christ.

“The Cross is not an ornament that we must always put in the churches, there on the altar. It is not a symbol that distinguishes us from others. The Cross is mystery, the mystery of God who humbles himself, he becomes ‘nothing.’ He becomes sin. Where is your sin? ‘I don’t know, I have so many here.’ No, your sin is there, in the Cross. Go and find it there, in the wounds of the Lord and your sins will be healed, your wounds will be healed, your sins will be forgiven. The forgiveness that God gives us is not the same as cancelling a debt that we have with Him, the forgiveness that God gives us are the wounds of his Son on the Cross, raised up on the Cross. May he draw us towards Him and may we allow ourselves to be healed by him.”
Posted by Province of Meribah at Wednesday, April 09, 2014