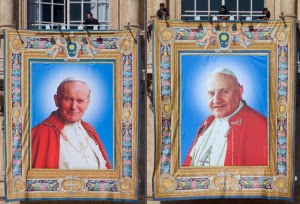 Matthew Bunson writes below about the preparations in Rome for the double ceremony to canonize Pope John XXIII and Pope John Paul the Great. What a magnificent event, two popes present for the canonization of two popes!

Even getting to Rome brought a sense of palpable excitement. The four-hour layover at Charles de Gaulle airport near Paris that completed my journey to Rome was marked by several remarkable sights and sounds.

As we all sat waiting passing the time, a group of pilgrims began chanting Morning Prayer and quietly singing hymns. The passengers at the surrounding gates first quizzically looked around and then grew silent listening. They did not scowl or roll their eyes; they listened attentively, and a few asked what was going on. In several languages, I heard the words “John Paul II,” “Giovanni Paolo,” “Juan Pablo” and “Jean Paul.”

There were also large contingents of Africans, Americans, French and Dutch Catholics on board the flight. By my informal count, my flight alone had three bishops. They will be joining the 150 Cardinals and 1,000 bishops, along with the more than 90 official delegations from various countries and 24 heads of state or royalty and perhaps several million pilgrims.
Posted by Province of Meribah at Saturday, April 26, 2014