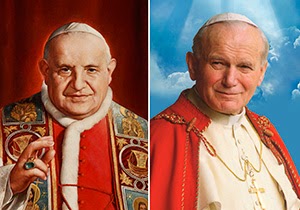 From John Thavis, a thoughtful write:

The record-setting speed of John Paul II’s canonization does, indeed, raise some questions. The “Santo subito!” (Sainthood now!) banners in St. Peter’s Square at the funeral of the Polish pope reflected the sentiments of many faithful who thought his deep spirituality, evangelizing energy and strong defense of human rights made him a saint for our times.

Yet what pushed his cause through so quickly was support at the highest levels of the hierarchy. At that same funeral, the man who would be elected as John Paul’s successor, Cardinal Joseph Ratzinger, told the faithful: “We can be sure that our beloved pope is standing today at the window of the Father’s house, that he sees us and blesses us.” In effect, that’s like declaring someone a saint – all that was left was to make it official. And to speed things up, Pope Benedict waived the normal five-year waiting period to begin the sainthood process…

…The debate over John Paul’s record on sex abuse revolves on issues of governance and management, and here is where the Vatican and critics seem to be on different pages. Most people view canonization of a pope as a canonization of his pontificate. But in recent years, the Vatican has repeatedly suggested that sainthood for a pope is more about personal holiness than papal job performance. In that sense, declaring Pope John Paul a saint is not the same as endorsing every decision he ever made, or his management style. He is being held up to the faithful as someone who lived the Christian virtues in an extraordinary way, not necessarily as “Pope John Paul the Great.” As Pope Benedict once put it, “Holiness does not consist in never having erred or sinned.”

The decision to canonize John XXIII at the same time reflects several factors. First, Pope Francis is clearly inspired by John XXIII’s pastoral style of governance, his direct style of communication and his emphasis on mercy over doctrine. As Massimo Faggioli points out in his excellent new book, John XXIII: The Medicine of Mercy, both John and Francis came from poor families and brought with them to the Vatican an emphasis on the church’s attention to the poor and suffering.

A primary factor in Pope Francis’ decision is the Second Vatican Council, which is celebrating its 50th anniversary. By adding John XXIII, who convened the council, Pope Francis moved the focus of this canonization away from John Paul II and toward Vatican II.