VATICAN CITY, VATICAN - APRIL 18: Pope Francis prays on the floor during a Papal Mass with the Celebration of the Lord's Passion inside St Peter's Basilica on April 18, 2014 in Vatican City, Vatican. Later today the Holy Father will attend the Way Of The Cross for his second time as a Pontiff. (Photo by Franco Origlia/Getty Images) 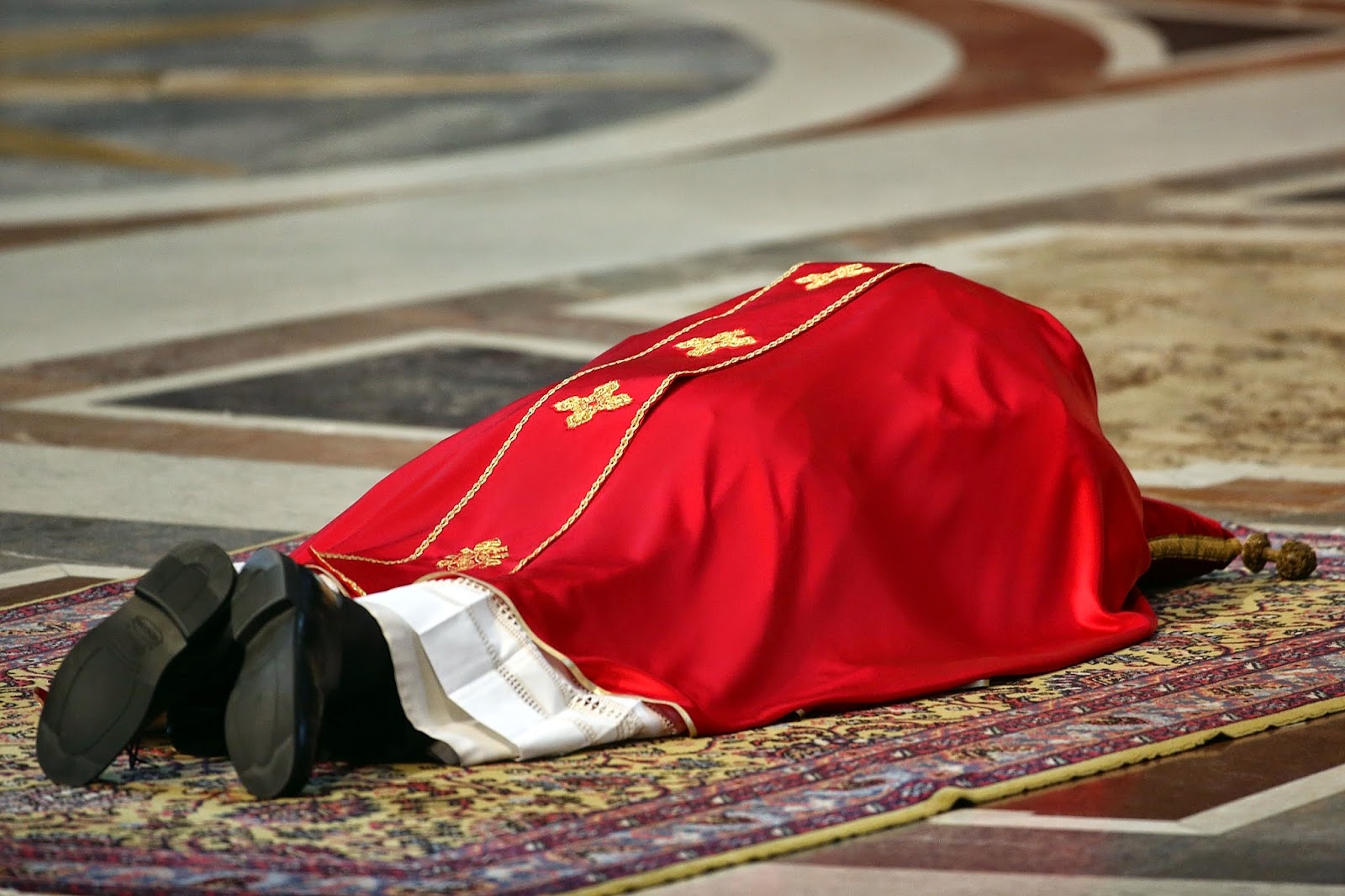 his Good Friday homily this year, Fr. Raniero Cantalamessa, the preacher of the papal household, preached today on idols, money, mercy, Judas in St. Peter's—and the simple church teaching that we cannot say for certain that there is any particular person is in hell:

One can betray Jesus for other kinds of compensation than 30 pieces of silver. A man who betrays his wife, or a wife her husband, betrays Christ. The minister of God who is unfaithful to his state in life, or instead of feeding the sheep entrusted to him feeds himself, betrays Jesus. Whoever betrays their conscience betrays Jesus. Even I can betray him at this very moment — and it makes me tremble — if while preaching about Judas I am more concerned about the audience’s approval than about participating in the immense sorrow of the Savior. There was a mitigating circumstance in Judas’ case that that I do not have. He did not know who Jesus was and considered him to be only “a righteous man”; he did not know, as we do, that he was the Son of God.

As Easter approaches every year, I have wanted to listen to Bach’s “Passion According to St. Matthew” again. It includes a detail that makes me flinch every time. At the announcement of Judas’ betrayal, all the apostles ask Jesus, “Is it I, Lord?” Before having us hear Christ’s answer, the composer — erasing the distance between the event and its commemoration — inserts a chorale that begins this way: “It is I; I am the traitor! I need to make amends for my sins.” Like all the chorales in this musical piece, it expresses the sentiments of the people who are listening. It is also an invitation for us to make a confession of our sin.

The Gospel describes Judas’ horrendous end: “When Judas, his betrayer, saw that he was condemned, he repented and brought back the thirty pieces of silver to the chief priests and the elders, saying, ‘I have sinned in betraying innocent blood.’ They said, ‘What is that to us? See to it yourself.’ And throwing down the pieces of silver, he departed; and he went and hanged himself” (Mt 27:3-5). But let us not pass a hasty judgment here. Jesus never abandoned Judas, and no one knows, after he hung himself from a tree with a rope around his neck, where he ended up: in Satan’s hands or in God’s hands. Who can say what transpired in his soul during those final moments? “Friend” was the last word that Jesus addressed to him, and he could not have forgotten it, just as he could not have forgotten Jesus’ gaze.

It is true that in speaking to the Father about his disciples Jesus had said about Judas, “None of them is lost but the son of perdition” (Jn 17:12). But here, as in so many other instances, he is speaking from the perspective of time and not of eternity. The enormity of this betrayal is enough by itself alone, without needing to consider a failure that is eternal, to explain the other terrifying statement said about Judas: “It would have been better for that man if he had not been born” (Mk 14:21). The eternal destiny of a human being is an inviolable secret kept by God. The Church assures us that a man or a woman who is proclaimed a saint is experiencing eternal blessedness, but she does not herself know for certain that any particular person is in hell.
Posted by Province of Meribah at Friday, April 18, 2014