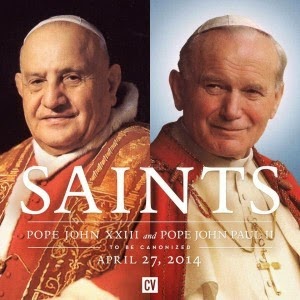 A great event is taking place this weekend.

“Right from the beginning of my ministry in St. Peter’s See in Rome, I considered this message (of Divine Mercy) my special task. Providence has assigned it to me in the present situation of man, the Church and the world. It could be said that precisely this situation assigned that message to me as my task before God.” - JP II 1981, at the Shrine of Merciful Love in Italy

"In these days, which mark the beginning of this Second Vatican Council, it is more obvious than ever before that the Lord's truth is indeed eternal. Human ideologies change. Successive generations give rise to varying errors, and these often vanish as quickly as they came, like mist before the sun.

The Church has always opposed these errors, and often condemned them with the utmost severity. Today, however, Christ's Bride prefers the balm of mercy to the arm of severity. She believes that, present needs are best served by explaining more fully the purport of her doctrines, rather than by publishing condemnations." - John XXIII Opening Address for the Council

In his homily for the Canonization, which took place in 2000, John Paul II emphasized that the message of Jesus Christ to Sr Faustina is located, in time, between the two World Wars and is intimately tied to the history of the 20th century. And looking to the future he said: “What will the years ahead bring us? What will man’s future on earth be like? We are not given to know. However, it is certain that in addition to new progress there will unfortunately be no lack of painful experiences. But the light of divine mercy, which the Lord in a way wished to return to the world through Sr Faustina’s charism, will illumine the way for the men and women of the third millennium” - Homily, Sunday, 30 April 2000

It is clear. Here it is explicit, in 2000, but it was something that had been maturing in his heart for some time. Through his prayer, he had this intuition. Today we forget everything far too quickly, even the Magisterium of the Church! Part of this is unavoidable, but we cannot forget the great content, the great intuitions and gifts that have been left to the People of God. And Divine Mercy is one of these.
- Address to the Parish Priests of Rome
Posted by Province of Meribah at Friday, April 25, 2014