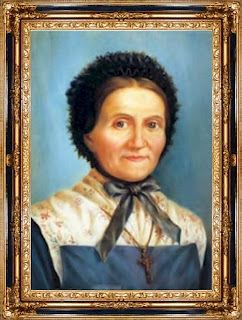 Life: Marguerite Bays was born in Switzerland to Pierre-Antoine Bays and Josephine Morel. Though we often hear about Saints who were religious sisters/brothers/priests, Marguerite Bays was a lay woman (an ‘ordinary’ member of the Catholic Church) for her entire life. She grew up to be a seamstress. Never marrying, Marguerite devoted her life to God by serving her church community (teaching young children the faith) and by working with the sick and the poor. Attending daily Mass, maintaining a strong devotion to the Immaculate Heart of Mary, as well as the Eucharist, were all elements of Marguerite’s deep prayer life. Rooted in the Gospel, she was called to care profoundly for her family. Like many of us, her family was not perfect – her brother was imprisoned, her sister returned to Marguerite’s home after her marriage failed, and Marguerite raised her nephew who was born out of wedlock. These things did not prevent Marguerite for loving her siblings. At the age of 35, she developed intestinal cancer. Through the intercession of Our Lady, Marguerite prayed that she might be cured and instead experience the sufferings of Christ in a profound way. On December 8, 1854, the day Pope Pius IX proclaimed the Immaculate Conception dogma, she was miraculously cured. However, every Friday she experienced some time of suffering related to the Passion. Eventually, she developed stigmata on her hands, feet, and chest. On Friday, June 27, 1879, at 3pm, Marguerite Bays died.
Posted by Province of Meribah at Saturday, November 30, 2019