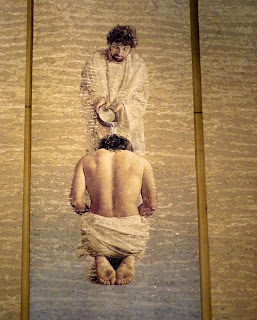 Shortly after Thomas Merton converted to Catholicism in the late 1930s, he was walking the streets of New York with his friend, Robert Lax. Lax was Jewish, and he asked Merton what he wanted to be, now that he was Catholic.

“I don’t know,” Merton replied, adding simply that he wanted to be a good Catholic.

Lax stopped him in his tracks.
A friend of Thomas Merton told say,” he told him, “is that you want to be a saint!”

“How do you expect me to become a saint?,” Merton asked him. Lax said: “All that is necessary to be a saint is to want to be one. Don’t you believe that God will make you what He created you to be, if you will consent to let him do it? All you have to do is desire it.”...

Thomas Merton knew his friend was right. Merton, of course, would go on to become one of the great spiritual thinkers and writers of the last century. His friend Bob Lax would later convert to Catholicism himself -- and begin his own journey to try and be a saint.

But the words Lax spoke ring down through the decades to all of us today. Because they speak so simply and profoundly to our calling as Catholic Christians.

Of course, if you only want to be a run-of-the-mill, average Christian, that’s probably all you’ll ever be. Every one can do just enough to get by. It’s not hard.

But the message Christ sends to all of us is an invitation to be something more. In the words of the old Army recruiting ad: be all that you can be...

Most of us are familiar with the phenomenal saintly stories of the Church. We grew up hearing of how John was beheaded, and Stephen was stoned; how Francis got the stigmata, or how Therese suffered humiliations and disease to die an early death. You hear stories like that and you can’t blame Thomas Merton for not really being eager to be a saint. It’s not only hard work, it often doesn’t have a happy ending.
But those are the stories we hear about. There are countless stories – millions, throughout the centuries – that we don’t. They are the anonymous saints who go about their daily lives quietly, peacefully, joyfully, finally entering into the fullness of grace without doing anything more dramatic than merely living the beatitudes.

They are the unsung saints.

In the Cathedral of Our Lady of the Angels in Los Angeles, you’ll see magnificent tapestries lining the walls. And they really are magnificent, designed and executed by the artist John Nava.
In the tapestries, you can see all the familiar saints whose names we know, in a row, facing toward the altar, as if in line for communion. It is – literally and figuratively – the communion of the saints. There is St. Nicholas, St. Gregory, St. Thomas Aquinas, St. Francis, St. Clare…and on and on, with their names over their heads.

But scattered among those saints are people without names – people you won’t find in Butler’s “Lives of the Saints.” A teenage girl. A young man from the barrio. Children in contemporary clothes. They are the saints whose names are known only to God. It is a beautiful and eloquent depiction of the day we celebrate today: All Saints.

What does it take to join them?

As Robert Lax explained, to a man whom some people today consider a saint:

All you really need… is to want to.

And God will do all the rest.
Posted by Province of Meribah at Friday, November 01, 2019