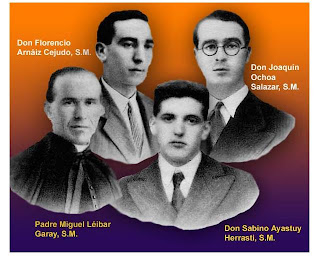 498 Spanish martyrs were proclaimed blessed and marked the largest number to be beatified simultaneously in the history of the Church. Some fifty thousand people gathered in St. Peter's Square for the celebration of the martyrs.

From early on, these four Marianists felt the call of Jesus to follow Him in the Society of Mary. And they responded with generosity.

MIGUEL LÉIBAR GARAY
Born February 17, 1885 in Aozaraza-Arechavaleta. He’s a sharp kid, happy, a prankster, yet a good student and godly. Not far from his village in Escoriaza is the Marianist Postulate of Nuestra Señora del Pilar.

“No way, son! - a boy as mischievous as you could never be a religious. And what’s more, our village always needs many strong arms and you need to help out as well!”

Miguel made his first vows on March 24,1903. He took his perpetual vows in 1907. Armed with a licentiate in philosophy from the Central University of Madrid, he went on to study theology at the University of Fribourg in Switzerland.

FLORENCIO ARNÁIZ CEJUDO
The youngest of four brothers. Born on May 10, 1909, in Espinosa de Cerrata. His parents are farmers. He’s a good child, docile, cheerful, quiet and pious. An excellent teacher in the town makes him his assistant; this way he can help teach the younger students. Florencio loves this. He also helps the pastor as server and he loves this too... One day, his friend Agapito Alonso tells him: “I’m going to Escoriaza to be a religious.”

And Florencio asks “and can’t I go along as well?”

Florencio takes first vows on September 5, 1926. He graduates in primary education and makes his perpetual vows in 1934.

JOAQUÍN OCHOA SALAZAR
His family lives in Berantevilla, but he is born on April 16, 1910, in the home of his maternal grandmother in Villanueva de Valdegovía. There are six children in the family: four girls and two boys. They are a very close family. The father works for the local government of the province of Álava and is stationed with his family in Peñacerrada. One fine day, Father Gregorio Lasagabáster passes through to talk about the Marianists. Three kids sign up: the two brothers Ochoa and a friend, Agustín Alonso.

Indeed, two of them would become excellent religious, good educators and school principals. Joaquín “has a fine disposition; he is good and responsible, conscientious, a hard worker and pious.”

He makes his first vows on September 5, 1928, and his perpetual vows in 1935. Having completed his bachelor’s degree in Segovia, he is studying for his licentiate in history.

SABINO AYASTUY ERRASTI
He is born on December 29, 1911, in Aozaraza, just like Miguel Léibar. He’s the sixth of seven children but soon his father dies. He is also set on entering the nearby Marianist community at Nuestra Señora del Pilar. He’s a young man with a rich and sensitive personality with deep feelings. One day he is sent out with the house donkey to do some errands. He doesn’t return and soon they find him on the way, like a Franciscan, urging his donkey forward:

“Eat, you little creature, eat, so you can continue to move on and carry me there!”

He has another side though: difficult, rebellious, yet he is of immense good will. His tremendous bursts of anger are soon followed by a remarkably humble repentance. And, as is usual for him, God is all. He takes his first vows with Joaquín Ochoa on September 5, 1928.

Father Miguel Léibar begins his priestly ministry in Cádiz. Then he is made principal of the Colegio San Juan Bautista in Jerez for six years (1916-1922). He becomes chaplain in Vitoria, then, once again becomes principal - this time at the Colegio Católico de Santa María in San Sebastián (1925-1930). Director of the community, he is a true father to his fellow brothers, fostering their spiritual life and attending to them with tenderness, when they are ill. He is loved by all.

In 1930, he is sent as chaplain to the Colegio Nuestra Señora del Pilar in Madrid, headed by the Servant of God Father Domingo Lázaro. They become close friends.

He is a first-rate educator – dynamic, enthusiastic and present to everyone and everything at the school. He knows how to reach his students, to be demand-ing and yet remain close to them. He is their spiritual director and confessor, and he would express his ideal in these words: “The great wish of my life is to guide souls on the path to heaven.”

A Marianist superior would say of him:

“The kids love him. He is an essentially dedicated soul, who knows how to bend to circumstances, to people and to the unforeseen situation. As a teacher he has a special knack of attracting students and dealing with them. He makes them like to work...”


Florencio Arnáiz flexes his first wings as an educator in September 1928 at the Colegio in Jerez. There he gives himself totally to the youngest students who came to worship him... not to mention being worshipped by their mothers as well. Always concerned with improving his teaching, he likes to keep up with the latest in pedagogy and pastoral ministry. In September 1933 he is sent to the Colegio del Pilar in Madrid, where again he leaves his unique mark upon his little madrileños.

Sabino Ayastuy begins his education ministry in September 1931 with the young Marianist aspirants in his homeland of Escoriaza. He remains there until September 1935 with only one brief period away for course work in San Sebastián. For those whom he helps to discern their call, he leaves an unforgettable remembrance. One of them writes:

“I can still see him with his kind smile, his affectionate demeanor, how he used to enter through the back door of the study and walk toward us without the slightest noise, in order to help us with our course work. And he would whisper in our ear: ‘Filioli carissimi... [My dear children...]’ He truly liked us and we could see his attempts to reign in his anger and ill-tempered disposition... An intense interior life of faith shone through whatever he taught. He would so often repeat to us those words of St. Paul: "This is God’s will: that you become saints."

Joaquín Ochoa, who had begun his education ministry with Sabino in Escoriaza, is sent the next year to the Colegio del Pilar in Madrid. There, from 1932- 1936, he is put in charge of the 8 to 10 year olds. He dedicates himself wholeheartedly to them. So note his superiors:

“Excellent religious. Fulfills all his duties faithfully. Upright judgment, prudent, responsible, very tractable. Very dedicated. Wholly in love with his profession as a religious and educator.”
Posted by Province of Meribah at Wednesday, November 06, 2019