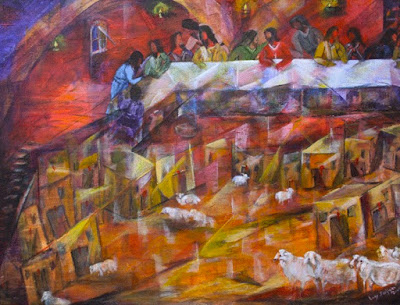 The Solemnity of the Most Holy Body and Blood of Christ.
That’s a liturgical, theological mouthful.
Just to name the day and what we celebrate on Sunday
might put off-putting for some: too pious, too churchy.
And, of course, those words ARE pious and they are churchy
but if we cannot at least begin to understand them at their core,
then they’re lost on us.

So, let’s bear with one another and make as simple an effort as possible
to understand the complexity, the depth and the mystery
of the Solemnity of the Most Holy Body and Blood of Christ.

• Beginning centuries before Jesus was born, his people, the Jews,
celebrated Yom Kippur, the Day of Atonement,
to atone for the sins they had committed in the previous year.

On Yom Kippur, the blood of a sacrificed animal
was sprinkled on the altar and on the people,
a sign that God was one with the people he had made his own
and he was reconciled with them.

The Jews still celebrate Yom Kippur,
but without the spilling and the splashing of blood.
Instead, they recount the story of the earlier sacrifice,
to remember it,
and they recite the prayers that accompanied that sacrifice.

• Centuries before Jesus was born, his people, the Jews,
at God’s command,
on the eve of their deliverance from slavery in Egypt,
celebrated the first Passover supper, a ritual meal,
which God charged them to celebrate then every year
to remember how the Lord had passed over the homes of the Jews
which had been sprinkled with the blood of a sacrificed lamb,
thus sparing those Jewish homes from the angel of death.

•Some 2,000 years ago - at Passover in Jerusalem,
Jesus gathered his friends for that same supper
on the night before he died.

That night, Jesus took the bread of Passover, gave thanks, broke it
and gave it to his friends saying,
Take and eat of this:
This bread is my body, broken for you, given up for you.

And taking the Passover cup filled with wine he gave thanks again
and gave it to his friends saying,
Take this, all of you, and drink from it.
This is the cup of my blood,
the blood of the new covenant, poured out for you,
for the forgiveness of sins.
When you do this: remember me.