Witness to the Faith 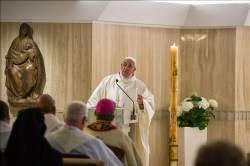 In his homily Pope Francis traced the path that led to the death of the first martyr of the Church, a death that was the exact replica of Christ’s. He, too, like Jesus , he said, had encountered “the jealousy of the leaders who were trying" to eliminate him. He too had "false witnesses" , a "rushed judgment”. Stephen warns them that are resisting the Holy Spirit, as Jesus had said , but "these people - said the Pope – were uneasy, were not at peace in their hearts". These people , he added, had " hatred " in their heart . That is why, on hearing Stephen’s words, they were furious . "This hatred - said Pope Francis - was sown in their hearts by the devil", "this is the devil’s hatred of Christ”.

The devil "who did what he wanted with Jesus Christ in his Passion now does the same" with Stephen. This "struggle between God and the devil" is clearly seen in martyrdom. “On the other hand, Jesus had told his disciples that they had to rejoice to be persecuted in his name: "To be persecuted, to be a martyr, to gives ones’ life for Jesus is one of the Beatitudes". That is why, the Pope added , "the devil cannot stand seeing the sanctity of a church or the sanctity of a person, without trying to do something". This is what he does with Stephen, but "he died like Jesus forgiving".

"Martyrdom is the translation of a Greek word that also means witness. And so we can say that for a Christian the path follows in the footsteps of this witness, Christ’s footsteps, to bear witness to Him and, many times, this witness ends up in laying down one’s life . You cannot understand a Christian without witness. We are not a ' religion' of ideas, of pure theology, beautiful things, of commandments. No, we are a people who follow Jesus Christ and bear witness – who want to bear witness to Jesus Christ - and sometimes this witness leads to laying down our lives”.

On Stephen’s death, as we read in the Acts of the Apostles, "a severe persecution began against the Church in Jerusalem". These people , the Pope observed , "felt strong and the devil provoked them to do this" and so "Christians scattered to the regions of Judea and Samaria". This persecution, the Pope noted, means that "the people spread far and wide" and wherever they went they explained the Gospel , gave testimony of Jesus , and so "mission of the Church" began. "So many - he recalled - converted, on hearing these people". One of the Fathers of the Church, explained this by saying : "The blood of martyrs is the seed of Christians". With "their witness, they preach the faith" :

"Witness, be it in everyday life, in difficulties, and even in persecution and death, always bears fruit. The Church is fruitful and a mother when she witnesses to Jesus Christ. Instead , when the church closes in on itself , when it thinks of itself as a - so to speak - 'school of religion', with so many great ideas, with many beautiful temples, with many fine museums, with many beautiful things, but does not give witness, it becomes sterile. The Christian is the same. The Christian who does not bear witness, is sterile, without giving the life he has received from Jesus Christ".

"Today thinking about these two icons - Stephen, who dies, and the people, the Christians, fleeing, scattering far and wide because of the violent persecution - let us ask: How is my witness? Am I a Christian who witnesses to Jesus or are a simple numerary in this sect ? Am I fruitful because I bear witness, or sterile because unable to let the Holy Spirit lead me forward in my Christian vocation?" .
Posted by Province of Meribah at Wednesday, May 07, 2014