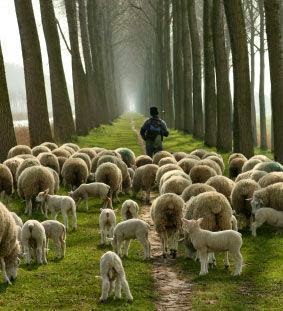 On a spring morning in 2010, a young man by the name of Dayan Machado found himself in a place he once would never have expected: face down on the floor of a cathedral in Florida, praying to the saints.

How he got there is a story unto itself—and illustrates beautifully, I think, part of this Sunday’s gospel message, about recognizing and listening to the voice of the shepherd.

Dayan was born in Cuba, raised without any religion at all in a country that officially promoted atheism and restricted religious practice. But one day in 1998, his parents turned on the TV and there was something surprising: a man in white, preaching to the people of Cuba and celebrating Mass in flawless Spanish. It was Pope John Paul II. Dayan listened intently and heard him speak of faith and freedom, of peace and forgiveness and hope.

And with that, the 15-year-old boy’s life changed. He later said he felt like an electric charge moved through him. He needed to learn more.

He began stopping by a local church to watch the Mass through an open window. After a few months, he got up the courage to speak to the priest. He told him he wanted to become Catholic. Dayan started attending catechism class with a few other students on the roof of the church. He never told his parents—but his father soon found out. “Do you think I’m blind?” his father asked him. “I know where you’re going. But,” he added, “don’t be afraid. We support you.”

A few weeks later, Dayan’s father won a lottery to leave Cuba with his family. But before they left, the parish priest baptized Dayan—choosing to do so on an afternoon when the church is normally locked and it wouldn’t attract attention.

In 1999, the Machado family left Cuba and settled in Tampa, Florida. Then, after finishing high school, Dayan made another big choice.

He decided to enter the seminary. He wanted to become a priest.

While studying for the priesthood, a longtime prayer of his was answered. His mother and father were baptized.

And so it was a few years later that Dayan found himself on the floor of that cathedral, hearing the litany of the saints—a young man who had grown up without any faith was taking the ultimate leap of faith, and committing his life to God.

The day he was ordained, his parents wrote him a letter.

They wrote about remembering how nervous he was to tell them that he wanted to be a priest. His father repeated the words that had been spoken so often by John Paul: “Do not be afraid.” And they concluded poignantly: “With a heart filled with holy pride, we seek your blessing.”

Today, Dayan Machado is a priest in Florida. And like countless other priests around the world, this weekend he will be praying in a special way that others will hear God’s call like he did, and make their own leap of faith.

This is Good Shepherd Sunday, and it is also Vocation Sunday, when the church asks us to pray for vocations to the priesthood, diaconate and religious life.

But if Dayan Machado’s story teaches us anything, it is this: vocations don’t necessarily begin in the pews. They can come from unlikely places—even in places that don’t know God.

But in spite of that, his life of faith began as so many do: in the home.

Sometimes a vocation begins in the kitchen, with a teenager watching TV, and an inner spark catching flame.

It might begin around the dining room table, or in the car on the way to soccer practice, or in the classroom, when someone poses a casual question and you can’t get it out of your head:

“Did you ever think about becoming a priest?”

Dare to ask the question: have you ever thought about religious life?

Do you think you might want to be a priest? A deacon? A sister?

And I’m not just talking about young people. God’s calendar isn’t our calendar. He calls at different times, for different reasons. He called me when I was in my 40’s, at a moment when I was finally ready to answer that question and able to form the word, “Yes.”

Is he calling someone you know?

Is he, perhaps, even calling you?

It all comes back—I believe— to the home. The family. I often tell parents at baptisms: you are where it all begins. You are the first teachers of your children. From you, I tell them, they will learn to pray. To hope. To dream. From you, they will learn how to persevere, how to get up when they fall. They will learn compassion and mercy.

From you, they will learn how to love.

And that includes how to love God and love our faith—and then put that faith into practice.

The family is where we really begin to learn who we are, what we want, what we believe, what we value.

That’s where examples begin and where lessons are taught.

That’s where the conversation needs to happen.

That’s where God slips in and calls to us, often in a whisper.

And this Mother’s Day weekend, I think it’s also good to be reminded of the vital role mothers play in vocations. There’s a story that’s told about Pope St. Pius X, a humble man with a saintly mother. She lived to see her son become pope. The day of his installation, she bent down to kiss his large ring, as is the custom, and she then presented to him her tiny wedding band. “Now you kiss my ring,” she said. “For without it, you never would have received yours.” And he did.

The gospel we heard today speaks to us about listening and responding to the voice of the shepherd. On this Good Shepherd Sunday, when we pray for vocations to religious life, we need to ask ourselves:

Are we making it possible for others to listen?

And are we responding?

Because as Dayan Machado discovered: sometimes when you listen, what you hear will change everything.

And your life will never be the same.