The Ascension of Christ - Be witnesses! 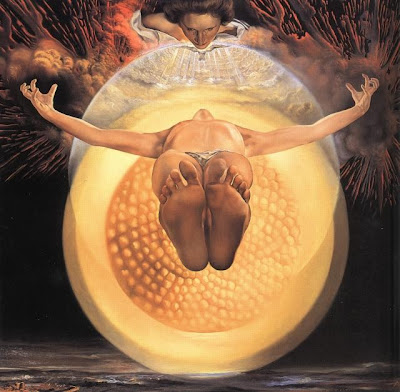 Dali said that his inspiration for The Ascension of Christ(above) came from a "cosmic dream" that he had in 1950, some eight years before the painting was completed. In the dream, which was in vivid color, he saw the nucleus of an atom, which we see in the background of the painting.

If we consider the readings from today's liturgy we find the following phrases:

Jesus had done and taught
he gave his instructions to the apostles
he had shown himself alive to them
he had continued to appear to them
he had told them not to leave Jerusalem
but to wait there
you ... will be baptised with the Holy Spirit
It is not for you to know times or dates
but you will receive power
when the Holy Spirit comes on you
and then you will be my witnesses
he was lifted up while they looked on
and a cloud took him from their sight.
staring into the sky
two men in white were standing near them
why are you ... standing here looking into the sky?
Jesus ... has been taken up from you.
he will come back.

Today we are called to see the work of the Father, and the Son, and the Holy Spirit!

The Apostles just stand there looking, staring, even waiting and this is precisely what God asks of them. It is only when they receive power from on high that they become something - witnesses - to all they have seen and heard and received. Don't you see? It's all God's work and, consequently, we are all God's work.
Just as with the Apostles, the Father completes his work in us by the gift of the Holy Spirit. It is the Spirit who gives us power to become all that we can be, all that we should be. In spiritual terms this means becoming witnesses to Christ in the lives we lead and the words we speak.

So if you are feeling powerless, out of control, hopeless, don't despair and don't try to play Mr Fixit. Stay put and wait in prayer, and "you will receive power."

Be patient, do what you can, pray - and don't give up!

"The Church, the Fathers, Catholic tradition—all bid us look up to Mary as our advocate and mediatrix. Thus the Church always applied to Jesus the example of the great King Solomon who, in the days of his glory and his wisdom, entrusted to his mother the exercise of his royal authority. Likewise, throughout the centuries, Christians have ever regarded Mary as their Queen, their helper in every need, their life, and their hope."

Blessed William Joseph Chaminade
Posted by Province of Meribah at Friday, May 30, 2014