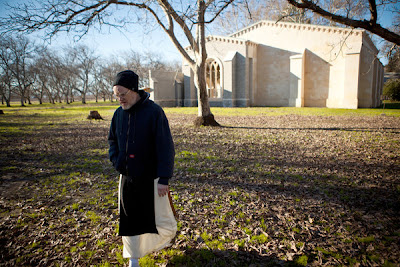 The rebirth of a medieval Cistercian monastery building here on a patch of rural Northern California land was, of course, improbable. William Randolph Hearst, the newspaper tycoon, brought the dismantled Santa Maria de Óvila monastery from Spain but failed to restore it. The City of San Francisco, after some fitful starts at bringing the monastery back to life, left its stones languishing for decades in Golden Gate Park. The Great Depression,World War II and lethargy got in the way.

But an aging and shrinking order of Cistercian monks have accomplished what great men and cities could not: the reconstruction of Santa Maria de Óvila’s most architecturally significant building, a 12th-century Gothic chapter house. The monks ascribed the successful restoration to their faith, though years of tenacious fund-raising, as well as a recent alliance with a local beer brewer, also helped.

“The meaning that this holds for us, and the link to hope, is that it may take generations,” the Rev. Paul Mark Schwan, the abbot of the New Clairvaux monastery, said of the restoration. “What appears dead, or almost dead, rises again.”

With the major work complete, the chapter house was opened to the public last year.

“We got into possession of the stones, and they’ve come home — a long ways from Spain, but back on Cistercian land with Cistercian monks returning it to sacred space,” Father Schwan said on a recent chilly afternoon, standing just inside one of the arched entrances, his voice resonating off the limestone walls and vaulted ceilings. “I look at this, and it’s remarkable we’ve come this far, that this is actually all put back together.”
Posted by Province of Meribah at Friday, January 11, 2013