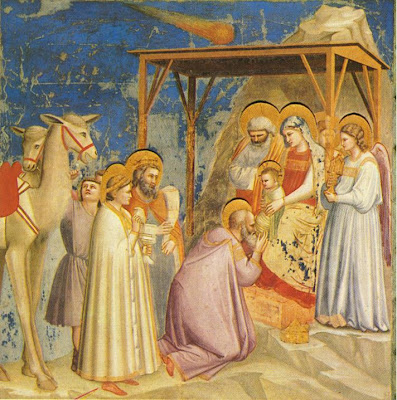 The Epiphany of the Lord
FIVE LESSONS OF THE MAGI

The unforgettable story of the journey of the Magi, as recounted in the Gospel of Matthew, is an artful summary of the principal dynamics of the spiritual life. Watching the night sky with scrupulous attention for signs of God's purpose, the Magi evoke the importance of alertness in the spiritual order. We must keep our eyes open to see what God is up to. For far too many people, the spiritual life never gets underway, precisely because they don't pay attention. Once they saw the star, they moved, despite the length of the journey and the dangers of the road. Sometimes people know what God wants them to do, but they don't act, either out of fear or laziness or the influence of bad habits. In their confident journeying forth, the Magi teach us not to miss the propitious moment. They teach us to move.
When they entered into Herod's territory, the Magi caught the attention of the king. And when they spoke to him of the birth of a new King of the Jews, Herod became frantic and tried to use them in order to destroy the baby. A third lesson: when you walk the path that God has laid out for you, expect opposition. We live in a sinful, fallen world, and there will always be forces at cross purposes to God. Refusing to cooperate with Herod's game, the wise men came to Bethlehem, found the child, and gave him their precious gifts. When you come to Christ, don't give him your second best; break open the very best of yourself and make it a gift for him. Finally, they were warned in a dream not to go back to Herod and so "they returned to their home country by another route." As Fulton Sheen commented so magnificently: of course they did; for no one comes to Christ and goes back the same way he came!”
— Fr. Robert Barron

Posted by Province of Meribah at Sunday, January 06, 2013