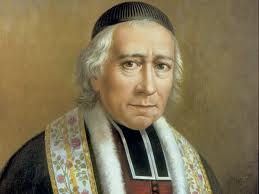 Blessed William Joseph Chaminade (1761-1850), priest of the diocese of Bordeaux, carried out a faithful and often dangerous priestly ministry during the difficult years of the French Revolution. In the aftermath he faced a new apostolic challenge: ignorance of the faith, religious indifference, the abandonment of Christian life, and the structural ruin of the Church. Aiming to dedicate the rest of his life to the renewal of the Church, he sought and obtained the title of Missionary Apostolic. He realized, under the guidance of the Holy Spirit, that new means were required for his times: new institutions, new methods, even a new kind of missionary. Community life in the spirit of the gospel has always been an effective method of implanting personal faith and a growthful environment for fulfilling its demands. Such was the experience of the group of apostles, called together by Jesus as they followed him closely and learned by His example and teaching. Such was the experience of the early Church, united with Mary in prayer and expectation of the Holy Spirit. Such was the experience of the first community of Jerusalem, which shared everything in common, and had but one heart and one soul.

Inspired by God's Spirit, Father Chaminade understood the rich creative possibilities of a Christian community for apostolic service. Such a community could bear the the witness of a people of saints, showing that the gospel could still be lived in all the force of its letter and spirit. A Christian community could attract others by its very way of life and raise up new Christians and new missionaries, thus giving life in turn to still other communities. A community could thus become the great means to re-Christianize the world.

It was this insight that give rise to the first groups of men and women founded by Father Chaminade as sodalities. In his work, the founder always sought inspiration in Mary, having contemplated at Saragossa the faithful Virgin who received the word of the Lord and pondered it in her heart, the Woman who gave Christ to the world, the Mother who forms all believers. Mary embodies all the attitudes of the gospel, in opposition to the spirit of evil. It is she who gives the watchword to do whatever her Son commands.

Commitment as a sodalist was for Father Chaminade equivalent to a consecration to Mary in order to assist her in her mission. Guided by the Holy Spirit, members of the sodality sought increasingly intense forms of dedication. Eventually some formed the nucleus of two religious congregations: the Daughters of Mary Immaculate, founded by Father Chaminade in collaboration with Adele de Batz de Trenquelleion at Agen in 1816; and the Society of Mary (Marianists), founded at Bordeaux in 1817. Father Chaminade saw in these two foundations a “person who would never die” to maintain, inspire, and extend the network of communities and works founded under his inspiration.

Today the varied groups which recognize their common link in the charism of Father Chaminade are usually designated by the generic name of “Family of Mary.” The life of Father Chaminade reveals a deep sense of Providence. Filled with a compelling awareness of the Church's mission, he was ready to adapt to ever-new situations, eager to respond to the Lord's indications and deeply sensitive to the needs of the times. He was gifted with tenacity of purpose, a profound spirit of prayer, and a keen ability to discern God's will. He wished to impress these traits on Marianists of all times.
Posted by Province of Meribah at Monday, January 14, 2013