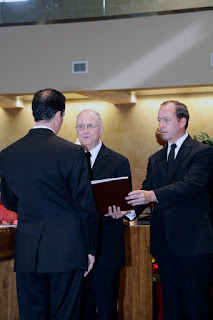 There are some who might try to tell you that the story of my vocation is really a lesson in ancient history. It just goes to show you how wrong some people can be. Actually the story is rather simple. I was never struck from a horse by a bolt of lightning. Maybe because I’ve never really ridden on a horse. So the story is at one and the same time not very spectacular, and very spectacular – because I am convinced that it has been a marvelous experience of the grace of Our Lady in my life.

I attended grade school in the days when every Catholic parish school was run almost completely by sisters. So from the very beginning we had this wonderful example of religious life day in and day out. During most of those years my family lived upstate outside of Buffalo and we were blessed to have two really great priests in our parish. And so between the example of the sisters and the priests it was almost inevitable that I would consider studying for the priesthood; I had no experience of men religious during those years. 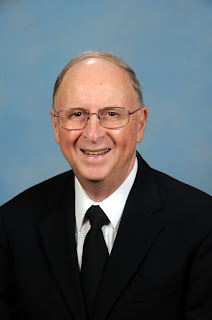 We moved back to Long Island when I was going into the seventh grade and I finished elementary school in St. Brigid’s in Westbury. The co-ops had not yet begun at that time and each high school would give their own entrance exam. So in the eighth grade I took three of them. First, because I was interested in the priesthood I took the exam for Cathedral Prep which was way down in the heart of Brooklyn, then Chaminade’s test, and finally a new school that was going to open the following year in Flushing – Holy Cross. I really wanted to go to Cathedral, and my friend’s father drove three of us there for the exam. I believe that one of the graces of my life was the fact that the weather that day was terrible. It was an ugly, dismal, gray, rainy Saturday that helped to make both the neighborhood around the school as well as the restaurant where we ate lunch look about ten times worse than they really were – and they really were pretty bad – so much so that I went home that day convinced that there was no way that I was going to take the LIRR and two subways every day to go into that neighborhood. I was accepted by all three schools and I decided I was going to Chaminade.
Later on that same year my cousin who was in the eighth grade at St. Boniface in Elmont asked me to go with him on a weekend retreat in Haverstraw, NY, conducted by the Salesian fathers and brothers. I had never been on a retreat before, but I enjoyed everything about it – the place, the prayer time, the spiritual experience, the brothers and priests, the recreation. My cousin, on the other hand, hated everything about it except the recreation, and he especially hated the food. My mother and my aunt thought we had actually split up and gone to different places because our responses were so different. I was so impressed with this first experience of religious men that I really began thinking about entering the Salesians.

That was the frame of mind that I came into Chaminade with, but then my second experience of brothers and priests in community began – the Marianists. In my freshman year all of my teachers were brothers; I was impressed with them as well as the other brothers that I could see around the school, impressed by their family spirit, their devotion to our Lady, their commitment to each other and their commitment to us. So much so that by the end of my freshman year I had decided that I wanted to share that same experience.

Early in my sophomore year I decided that I would like to enter the following year. At that time we had a boarding school upstate in Beacon, NY, for students in high school who wanted to enter the Marianists. As is turned out, though, my parents wanted no part of that plan and insisted that I graduate from Chaminade first before I entered. So that is exactly what I did. Our formation program in those days was very different from today. Young brothers from the eastern third of the country first spent our novitiate year outside of Utica in a small town called Marcy, NY. It was a wonderful year that I really loved and that ended with our first profession of vows in August of 1960. After that we went to our Marianist University of Dayton where I then spent four great years.

During my last semester there I had the opportunity to teach one sophomore religion class at Chaminade High School in Dayton, and then right after graduating from UD I taught summer school at Chaminade Dayton. Now at that point I could have been sent to any of about ten schools on the eastern seaboard and Puerto Rico. But as it turned out, Chaminade High School in Mineola needed a German teacher and – although neither I nor my family would ever have expected it when I first entered – my first assignment was right back here at CHS. I made final vows one year later and from there the rest is all history. It’s been my privilege, by the grace of Our Lady, to have taught here at Chaminade for the past 46 years. It has been an absolutely unique experience that I would not trade for anything. I thank God and Our Lady for the brothers with whom I have shared community, the hundreds, maybe thousands of students whom I have taught, and the many people whose lives I have had the grace to touch. May every one of you be so blessed.


+ + +
Pray for the Canonization of Blessed William Joseph Chaminade
"The more you know yourself, the less you will trust in your own strength, and if divine light should become bright enough to allow you to penetrate into the double abyss of your nothingness and your miseries, your trust in God will be your only stay. How strong then will you be! God communicates his strength to us in proportion to the interior convictions of our own weaknesses. This conviction is a great grace."
Blessed William Joseph Chaminade
Posted by Province of Meribah at Tuesday, September 07, 2010