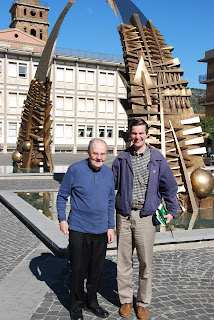 He was the other half of my soul.
Did we ever argue? Of course we did. It was always good arguing with him because at base there was a deep mutual respect. At one time when we were returning from Rome in the early 70's, we stopped to visit our Austrian Province in Vienna. The Provincial had asked us to visit him and let him know how we were doing. That evening he took us to an opera, "Bartered Bride" by Smetana, and we returned home to the Community at about 10 o'clock where we started to discuss what we were going to do next in  those tumultuous times. We argued from 10:30 at night until a quater to six in the morning; then we left our room and went to Morning Prayer and Mass!


From the Funeral Homily for Fr. Francis Keenan, S.M.
Posted by Province of Meribah at Monday, September 27, 2010