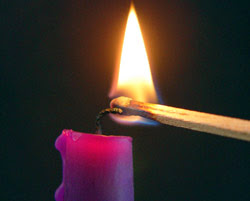 Today we’re at the first Sunday in Advent. This is a season of preparation. Our second reading is Romans 13:11-14 in which are embedded not only images of moving from darkness to light, from slumber to awareness, but both negative and positive instructions.

One would hope that as we prepare for the coming of the Christ child, we would need neither a “sin patch” nor a skin patch to alert us to these kinds of behaviors, and that we would understand how inappropriate these actions are for anyone who wishes to visit the manger at Bethlehem.

On the other hand, we’re encouraged to “put on the Lord Jesus” — a clothing metaphor which is a favorite of the Apostle Paul, who was quite aware that there are too many wardrobe malfunctions among the people of God. “Put off, therefore,” he would say, “the garments of unrighteousness.” And here, as elsewhere, he says, “Put on the Lord Jesus.”

Christ Jesus — our Advent patch. The Advent Person. The Advent Reminder. This season is about Him. It is not about us. It is a time to “wake from sleep” and “lay aside the works of darkness” because “the day is near.”

Instead of a “sin patch,” Paul advocates a different therapeutic model — to put on “the armor of light” and “the Lord Jesus Christ.” In other words, Paul urges his readers to get “patched up” and prepared for a life lived in and for the in-breaking kingdom, rather than to continue in the sins of the past. Rather than behaving in a way that sends out the signals of sin, Paul argues that we “put on the Lord Jesus” and thereby send out signals of righteousness.

While we expend a lot of effort to keep our “real” selves a secret from those around us, we need to remember that God has already been engaged in continuous monitoring of our souls — no “sin patch” necessary. The One who created us always knows the truth of what’s flowing back and forth inside us, whether it’s healthy or diseased, sober or soused.

Other people will figure us out, too, by watching us over a period of time. Keeping secrets, particularly ones involving our own behavior, is a full-time job. As Thomas Carlyle, the 19th-century British sage, once noted, “He who has a secret should not only hide it, but hide that he has it to hide.” With all that “hiding” going on, it’s no wonder that, somehow, even our best-kept secrets eventually see the light of day.
Posted by Province of Meribah at Sunday, November 27, 2016