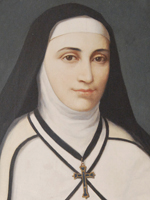 Adèle de Trenquelléon
On May 25, 1816, in the town of Agen, France, a young woman of aristocratic birth consecrated her life to the Blessed Virgin in a new and powerful way.
On that day 200 years ago, Adèle de Batz de Trenquelléon established the Filles de Marie Immaculée, the Daughters of Mary Immaculate, whom we know as the Marianist Sisters.
Adèle felt called to religious life at an early age. Through a fortuitous series of circumstances, Adèle came into contact with a priest named William Joseph Chaminade.
Adèle and Chaminade were kindred spirits. Both had dedicated their lives to God and their talents to rebuilding the Church in France in the wake of the revolution.
With the support of Fr. Chaminade and in the company of Marie Thérèse Charlotte de Lamourous and a small group of women, Adèle initiated this new community to carry out the “mission of Mary.”
Today, Marianist Sisters minister in 14 countries across the globe. They serve in education, pastoral ministry, retreat leadership and social justice, touching the lives of thousands of God’s children every day.