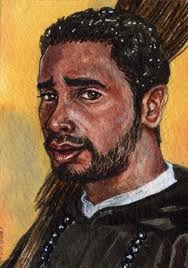 St. Martin de Porres was born at Lima, Peru, in 1579. His father was a Spanish gentleman and his mother a black freed-woman from Panama. At fifteen, he became a lay brother at the Dominican Friary at Lima and spent his whole life there - as a barber, farm laborer, and infirmarian among other things.
Posted by Province of Meribah at Thursday, November 03, 2016