Saint Isaac Jogues wrote the following to a friend before returning to the New World one last time, “My heart tells me that if I am the one to be sent on this mission I shall go but I shall not return. But I would be glad if our Lord wished to complete the sacrifice where He began it. Farewell, dear Father. Pray that God unite me to Himself inseparably.”

These words were to prove prophetic. In 1646, Saint Isaac Jogues received the martyr’s crown when murdered by a young Indian to whom he had been teaching the Catholic faith. What makes this story even more remarkable is that the following year, this same young Indian asked to be baptized taking the name Isaac Jogues because of the mercy shown to him by the other Jesuit missionaries. Shortly thereafter, he was murdered by members of his own tribe because he had accepted baptism.

In the three hundred and sixty-nine years since the deaths of Saints Jean de Brébeuf, Isaac Jogues and their companions, the Catholic Church has flourished on the North American Continent. Thanks be to God that for many of those who followed in the footsteps of those early missionary martyrs, they did not have to literally give their life by the shedding of their blood. I can imagine that the thought of physical martyrdom never crossed the minds of Fathers Columba, Timothy, or Luke as they made their voyage to the American Continent.  Fortunately, they – like us – could take comfort in the scriptures, the word of God. As they did their lectio one can only conceive what they felt in their hearts as their eyes came across these words from our first reading from Saint Paul to the Romans, “it was also for us, to whom it will be credited, who believe in the one who raised Jesus our Lord from the dead, who was handed over for our transgressions and was raised for our justification..” 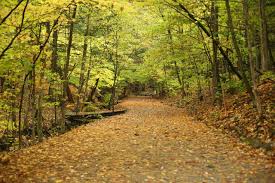 No doubt these very words of Saint Paul were familiar to those eight Jesuit missionaries who gave of themselves by the shedding of their blood in seventeenth century North America. No doubt it was due to their knowledge of having being chosen by Christ that they were able, by the gift of faith received in baptism, to accomplish the will of God. Each one of us has been called and chosen by God to some specific good work.

Listen to these words from Blessed John Henry Newman, the great nineteenth-century English thinker. Though not a missionary himself, this convert from the Church of England to the Roman Catholic Church speaks words that could easily have come from the lips of the North American Martyrs or our own founders of our Community. “God has created me to do Him some definite service; He has committed some work to me which He has not committed to another. I have my mission – I never may know it in this life, but I shall be told it in the next. Somehow I am necessary for His purposes. I have a part in this great work; I am a link in a chain, a bond of connection between persons. He has not created me for naught. I shall do good, I shall do His work; I shall be an angel of peace, a preacher of truth in my own place, while not intending it, if I do but keep His commandments and serve Him in my calling.Therefore I will trust Him. Whatever, wherever I am, I can never be thrown away. If I am in sickness, my sickness may serve Him; in perplexity, my perplexity may serve Him; if I am in sorrow, my sorrow may serve Him. My sickness, or perplexity, or sorrow may be necessary causes of some great end, which is quite beyond us. He does nothing in vain; He may prolong my life, He may shorten it; He knows what He is about. He may take away my friends, He may throw me among strangers, He may make me feel desolate, make my spirits sink, hide the future from me – still He knows what He is about.”

Today we recall the lives of the martyrs memorialized today in the context of these words. We focus on the amazing and deep faith of Father Isaac Jogues. He had, through the grace and guidance of God, left France and journeyed to “New France” to bring the gospel and, hopefully, a better life to the indigenous people. He learned the language of the native people, their customs, and preached. Many were won over by his dedication and his energy. He clearly believed that his vows of poverty, chastity, and obedience would help him to live and preach the word of God. Although Isaac had many successes, he was eventually captured by enemies, enslaved, and tortured. His hands were so mutilated through burning, biting, and cutting his fingers, that he could no longer say Mass. He was freed after a Dutch trader was able to ransom him, and he returned to France. The Pope gave him a dispensation from the rule that the Eucharist could only be held in the right hand between the index finger and thumb; Isaac again could celebrate the Mass.

Isaac returned to “New France” after only a short stay in his native country. Even though his once strong hands that had built shelters, helped to propel canoes up rivers, and marked new converts with the sign of the cross, they were now nearly useless; he felt that he could be of use in the wilderness. He was again captured. He was tortured, and dismembered. His life and his actions were the living gospel. He steadfastly believed in “the one who raised Jesus, our Lord, from the dead; our Lord who died for our transgressions.” Fr. Jogues clearly believed in the words of Jesus in Luke’s gospel for today. “One’s life does not consist of possessions”, but rather, that one’s riches are “actions that matter to God.” When Isaac’s life was demanded of him, he had no significant possessions; he only had the knowledge that his actions were for the greater glory of God.

Posted by Province of Meribah at Monday, October 19, 2015