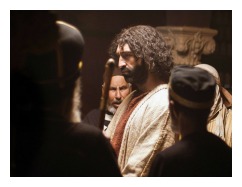 The Pharisees in Jesus’s time numbered about 6,000 and were found all over Palestine. They taught in synagogues, saw themselves as religious paragons and were self-appointed guardians of the Law and its observance. Today's gospel from Luke tells the story of a growing camp of Pharisees who were antagonistic to Jesus.

One of their leaders invites them to his home for a meal. He also invites Jesus. Luke informs us that the guests had Jesus "under close scrutiny" or “hostile observation,” suggesting that He was invited in order to ambush Him. They had a fixed grudge against Him and were lying in wait to trap Him in what He said.

The circumstances are set with the appearance of a man suffering from “dropsy,” known today as “edema.” I like to imagine the man as he stood before the Pharisees and Jesus as suffering under the serious condition of “pulmonary edema,” described in a modern medical encyclopedia this way:

Pulmonary edema, a condition brought on be heart failure, is the excess collection of watery fluid in the lungs. The fluid collects in the many air sacs of the lung, making it difficult to breathe. When the heart is not able to pump blood to the body efficiently, the amount of blood staying in the veins that take blood through the lungs to the left side of the heart increases. As the pressure in these blood vessels increases, fluid is pushed into the air spaces (alveoli) in the lungs. This fluid reduces normal oxygen movement through the lungs, which can lead to shortness of breath, and if untreated can lead to death.

Imagine the poor man with dropsy to be suffering from the symptoms just described. Imagine the Lord gazing at him with compassion, and then turning to the Pharisees reclining at table. Here are the words Jesus speaks to them: “Is it lawful to heal on the Sabbath or not?” After the question, Luke writes this: “. . . they remained silent. He took the man, healed him, and dismissed him.”

Jesus, of course, answers His own question by healing the man. The silence of the Pharisees confirms that Jesus has communicated His position to them decisively: He concisely and pointedly states it in another context: "The Sabbath was made for man, and not man for the Sabbath.” This marvelous turn of events reverses the situation, so that the Pharisees are now trapped, not Jesus. They are caught in a dilemma, silent because they are unable to answer the Lord’s question. If they said ‘Yes,’ they would seem to their followers to be lax in their strict interpretation of the law and to compromise their demand that others follow the letter of the law. If they said ‘No,’ they feared their followers would accuse them of being cruel to the man in contrast to Jesus who was moved by compassion to mercifully cure him. The Pharisees were frozen in legalism. In this incident, their small-mindedness is confronted with the large-hearted love of God.

The point of the story narrated in today’s gospel, I think, is to realize that compassion and mercy transcend the law and fulfill it. By His action, Jesus declares this to be the standard underlying the very purpose of the law. In contrast to the Pharisaic vision of subservience to it, Our Lord provides a vision entirely different, giving priority over the law to the compassion and mercy which He gave and asked others to give throughout His public ministry.

I believe a major part of our mission today as Christians is to ardently pray and, wherever we can, to assiduously work for those who suffer greatly in our world: for the victims of global inequality and poverty, for example, or the victims of human trafficking and drug trafficking, of the multi-billion pornography industry, of abuse to the earth and to the ecology of the human mind and heart, and of the victims of war.

Like the man with dropsy, we need to see them all with the compassionate eye of Jesus and to creatively develop ways to help them as much as we can with His merciful hand. Today’s gospel, finally, doesn’t ask whether something is legal or illegal. It speaks to us as obedient sons and daughters of God who is love, who want to follow in Our Lord’s footsteps, and so to be loving, caring, merciful, and forgiving: which is what God’s law in both the Old and New Testament is all about.

Posted by Province of Meribah at Friday, October 30, 2015