LENT - The Door of Mercy

Pope Francis: Who are you to shut the door of mercy?

From his homily yesterday morning:

Pope Francis has again forcefully emphasized the Catholic church’s need to be merciful, pointedly asking who Christians that do not allow someone to renter the church community think they are. 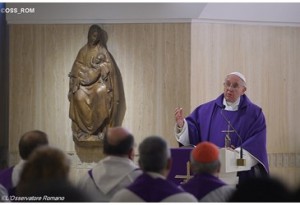 Speaking Tuesday during his daily homily at the Domus Sanctae Marthae, Francis asked bluntly: “Who are you who shuts the door of your heart to a man, a woman who wants to improve, to return back into the people of God, because the Holy Spirit has stirred his or her heart?”

The church, the pontiff said, is “the home of Jesus and Jesus welcomes — but not only welcomes, [he] goes to find people.”

“And if people are hurt, what does Jesus do?” asked Francis. “Scolds them because they are hurt? No, he comes and carries them on his shoulders.”

“This is called mercy,” the pope continued. “And when God reprimands his people — ‘I desire mercy, not sacrifice!’ — he speaks of this.”

Francis’ emphasis Tuesday on the need for mercy from Catholics comes just days after the pope announced Friday that he will be convoking in December an extraordinary jubilee year for the Catholic church to be called the Holy Year of Mercy.

The pope has made mercy a central theme of his papacy. On Friday he said he wanted to call the holy year — a special time for Catholics to receive blessing and pardon from God and remission of sins — so that the church “can make more evident its mission of being a witness of mercy.”

Posted by Province of Meribah at Wednesday, March 18, 2015