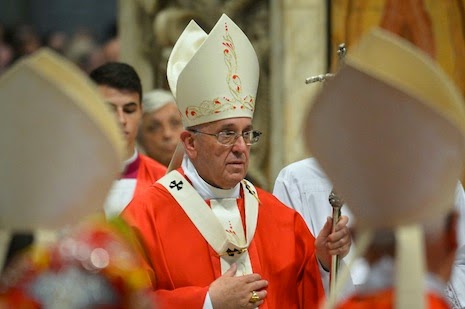 Pope Francis focused his homily for the feast of the First Roman Martyrs on the witness of martyrdom, and prayed for all who continue to be persecuted for their faith, particularly in the Middle East.

“The Church grows thanks to the blood of the martyrs. This is the beauty of martyrdom,” the Pope observed in his June 30 Mass.

“It begins with witness, day after day, and it can end like Jesus, the first martyr, the first witness, the faithful witness: with blood.”

Centering his reflections on the death of the first Christians during the persecution of Nero in the year 64, Pope Francis emphasized to those present in the Vatican’s Saint Martha guesthouse what he has said many times before: that there are more martyrs now than in the early Church.

Drawing attention to the prayer said at the beginning of Mass, the Holy Father noted how it reads, “the blood of the martyrs is the seed of the Church.”

Making an analogy, he said that when hearing this we can think of the growth of a plant, as well as the words of Jesus that “the kingdom of heaven is like a seed. Someone took the seed and planted it in the ground and then went home – and whether he slept or was awake – the seed grew and blossomed.”

Observing how this seed represents the Word of God that eventually grows and becomes the Kingdom of heaven, the Pope stated that it becomes the Church only with the strength of the Holy Spirit and the witness of Christians.

“And when historical situations require a strong witness, there are martyrs, the greatest witnesses.”

However there is one condition in order for a witness to be true, he explained, which is that “there must be no conditions.”

“In the Gospel reading of the day, one of Jesus’s disciples said that he would follow Him, but only after having buried his father… and the Lord replied: ‘No! Follow me without conditions,’” the Bishop of Rome recalled, explaining that “Your witness must be firm.”

“You must use the same strong language that Jesus used: ‘Your words must be yes, yes or no, no.’ This is the language of testimony.”

Bringing to mind the contemporary Church in Rome which grows because it is “fed by the blood of martyrs,” Pope Francis stated that “it is right that our thoughts turn to the many martyrs of today, the many martyrs who give their lives for faith.”

“It is true that during the times of Nero many Christians were persecuted,” he continued, “and today there are just as many.”

Noting how there are “many martyrs today in the Church, many persecuted Christians,” the Pope encouraged attendees to think “of the Middle East where Christians must flee persecution, where Christians are killed.”

“Even those Christians who are forced away in an ‘elegant’ way, with ‘white gloves:’ that too is persecution,” he observed, recognizing that “there are more witnesses, more martyrs in the Church today than there were in the first centuries.”

“Let us think also to our brothers who are persecuted, who suffer and who, with their blood are nurturing the seed of so many little Churches that are born. Let us pray for them and for us.”

This feast marks Pope Francis' last daily Mass until the end of the summer. His daily homilies will continue in September.
Posted by Province of Meribah at Wednesday, July 02, 2014