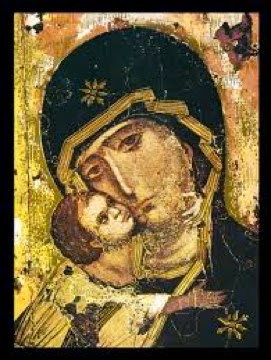 As Marianists, consecration to Mary consists in offering ourself entirely to Mary in order, through her, to belong totally to Jesus. All consecrations therefore are ultimately through and with Mary to Jesus. This is in imitation of the Son of God who offered Himself entirely to Mary not only in her womb but as a Son to a Mother so as to come to earth and become one with all humanity. The Son of God's giving of Himself to Mary therefore did not end at His birth but continues forever as the bond between a Mother and a Son is eternal.

Following the entrustment of John to the Virgin Mary at the foot of the Cross, Pope John Paul II teaches that by entrusting oneself to Mary, each Christian, like John the Apostle, welcomes the Mother of Christ into his own home and heart. He continues by saying, As Mary gave birth to Christ, the Head of the Mystical Body, she also had to have given birth to all of the members of that same body.
Posted by Province of Meribah at Monday, July 28, 2014