“Mass is so boring!”

How often have you parents heard that from your kids on Sunday morning? How often have our teachers and catechists heard it as they prepare our children for Mass? And, let’s admit it, how often have we said it to ourselves?

What do we say to that unfortunate and almost sacrilegious statement? 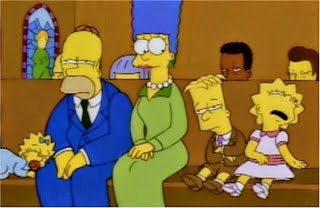 Well, for one, we simply reply, No, it’s not! You may find the Mass boring, but, that’s more your problem than the fault of the Mass.

We may find a lot of very important activities in life “boring”: visits to the dentist can be that way; kidney patients tell me dialysis three times a week is hardly a thrill; voting is no barrel of laughs. But, all three of them are very significant to our wellbeing, and their value hardly depends on us being ecstatic while doing them. The Mass is even more important for the health of our soul than those examples.

Boredom is our problem, and social commentators tell us we today, so used to thirty-second sound bites, or flipping the channel when we yawn at a program, are susceptible to it.

Thank God, a person’s or an event’s value does not depend on its tendency to sometimes “bore” us. People and significant events exist not to thrill us, unless we are the most narcissistic and spoiled of brats!

This is especially true of the Holy Sacrifice of the Mass. We believe that every Mass is the renewal of the most important, critical event that ever occurred: the eternal, infinite sacrifice of praise of God the Son, Jesus, to God the Father, on a cross on Calvary on a Friday called “good.”

Come to think of it, the Roman soldiers were “bored” there, too, as they mocked Jesus and rolled dice for his tunic, the only property He had.

Two, we hardly go to Mass to be entertained, but to pray. If the flowers on the altar are pretty; if the music is good; if the air conditioning is working; if the sermon is short and meaningful; if the folks are friendly . . . all that sure helps.

But, the Mass works even when all of the above may be missing – - and, sadly, they often are!

Because, the Mass is not about us, but about God. And the value of the Mass comes from our simple yet profound conviction, based on faith, that , for an hour on Sunday, we’re part of the beyond, lifted up to the eternal, a participant in a mystery, as we unite with Jesus in the thanks, love, atonement, and sacrifice He eternally offers His Father. What Jesus does always works, and is never boring. The Mass is not some tedious chore we do for God, but a miracle Jesus does with and for us.

A gentleman was just telling me about his family Sunday dinner, the heart of the week when he was growing up. The food was so good because his mom cooked it so well, and the table so happy because his dad was always there!

Even after he got married and had his own kids, they’d all go to his mom and dad’s for that Sunday dinner. When his kids got a bit older they asked if they “had to go,” because, yes, at times they found it “boring.” Yes, you, do, he would reply, because we don’t just go for the food, but because of love, because mom and dad are there!

He teared-up as he recalled that, as mom and dad got old, the food wasn’t as good and the company not as sparkling, but he’d never miss, because that Sunday event had a depth of meaning even when mom burned the lasagna and dad nodded off.

And now, he concluded, he’d give anything to be there again, because mom’s gone, and dad’s in a home.

So now he and his wife host it, and he hopes his three kids will one day bring their spouses and children to their Sunday table.

See, the value of that Sunday dinner doesn’t depend on how good the food is; how expensive the wine; how interesting the conversation. All that sure helps, but it’s the event that has the real value.

Same with the Sunday dinner of our spiritual family: Mass.

Some folks think a game at Yankee Stadium is boring; some consider country music the same; some people tell me that values such as friendship, volunteer work, family, loyalty, generosity, and patriotism are “passe,” no longer “exciting.”

I’d say they got a problem!

And some tell me “Mass is so boring…