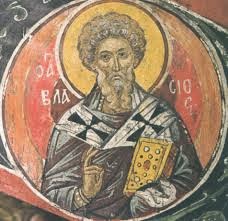 Saint Blaise devoted the earlier years of his life to the study of philosophy, and later became a physician. In the practice of his profession he saw so much of the miseries of life and the shallowness of worldly pleasures, that he resolved to spend the rest of his days in the service of God. From being a healer of bodily ailments he became a physician of souls.

When appointed bishop, Saint Blaise, began to instruct his people by example. From all parts, the people came flocking to him for the cure of bodily and spiritual ills.

When the governor began a persecution by order of the Emperor, Saint Blaise was seized. After interrogation and a severe scourging, he was hurried off to prison. While he was under custody, a distraught mother, whose only child was dying of a throat disease, threw herself at his feet and implored his intercession. Touched at her grief, he offered up his prayers, and the child was cured.

Prayer to Saint Blaise
Dear bishop and lover of souls,
you willingly bore heavy crosses in faithful imitation of Jesus.
Similarly, with Christlike compassion you cured many sufferers.
Than after undergoing horrible torture,
you died as a martyr for Christ. Obtain a cure for these ills if this is agreeable to God. Amen.

Blaise is the patron saint of wild animals because of his care for them.

Posted by Province of Meribah at Monday, February 03, 2014