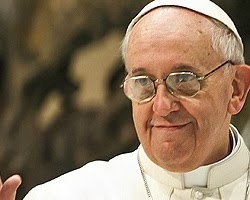 Pope Francis during his Homily at Mass on Friday at the Casa Santa Martha said that as Christians we are called to proclaim the Gospel with humility.

Taking his cue from Friday’s Gospel which recounts the tragic death of John the Baptist, the Pope said John was the man God had sent to prepare the way for his son.

The Holy Father recalled how this great Saint firstly, proclaimed Jesus Christ. John had the chance to say he was the Messiah, added the Pope, but he did not. Secondly, said Pope Francis,  John the Baptist was “a man of Truth.”

Concluding his homily the Holy Father said we should not take advantage of our condition as Christians, as if it were a privilege. Instead we are called proclaim the Gospel message with humility without seizing on the prophecy.
Posted by Province of Meribah at Tuesday, February 18, 2014