Without prophecy, only clericalism 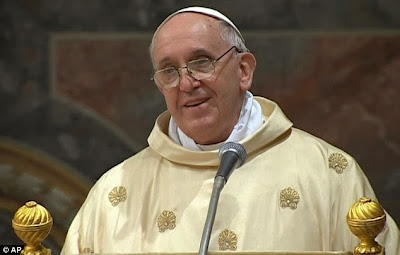 (Vatican Radio) A church without prophets falls into the trap of clericalism. These were the words of Pope Francis during his homily at Masson Monday morning in the Vatican’s Casa Santa Marta. Commenting on the day’s readings, Pope Francis said a prophet is someone who listens to the words of God, who reads the spirit of the times, and who knows how to move forward towards the future. True prophets, the Pope said, hold within themselves three different moments: past, present, and future. They keep the promise of God alive, they see the suffering of their people, and they bring us the strength to look ahead. God looks after his people, the Pope continued, by giving them prophets in the hardest times, in the midst of their worst suffering. But when there is no spirit of prophecy amongst the people of God, we fall into the trap of clericalism. In the Gospel, for example, the priests ask Jesus: "With what authority do you do these things? We are the masters of the Temple!" They didn’t understand the prophecy, Pope Francis said, they had forgotten the promise. They didn’t know how to read the spirit of the times, they didn’t listen to the words of God, they had only their authority. When there is no prophecy amongst the people of God, the emptiness that is created gets filled by clericalism. All memory of the past and hope for the future are reduced only to the present: no past promise, no future hope. But when clericalism reigns supreme, Pope Francis said, the words of God are sorely missed, and true believers weep because they cannot find the Lord. As we prepare for the birth of the Lord, Pope Francis concluded, let us pray: "Lord, let us not lack prophets amongst your people!" All those who are baptised are prophets: let us not forget God’s promise, let us not tire of moving forward.

Posted by Province of Meribah at Tuesday, December 17, 2013