I hate being a shepherd. 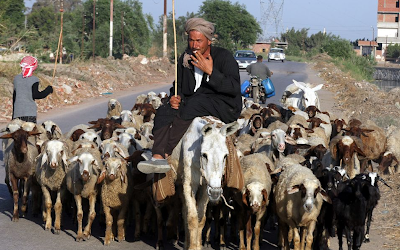 Over at First Things, today, we meet a shepherd who hates the sheep; he hates their stink and their stupidity — he dreams of being a pirate, and even pays grudging respect to the wolves he must keep at bay:

It is different for his son, my cousin. Joining us in the fields, he had adopted the self-important swagger of a boy set to working among the men, but a month of raw weather, of keeping predators at bay while saving the sheep from themselves—for there is no stupider creature on G-d’s earth than a sheep—has brought a dullness to his step. A wolf can be cunning, but does not have to be; even a lupine dullard is smarter than the filthy, stinking sheep we guard and save and lead and nurse back to health, when we can.

This sheep, my uncle pronounces, as he treats the wound with garlic and honey and binds it tightly, will likely live; its wound is slight. As I watch him work, my imagination and my stomach conspire against me. Our meal tonight was only lentils and bread and at the notion of a lamb roasted with garlic my gut has gone rude and noisy.

This, more than anything, overwhelms whatever meager pleasures a shepherd might take in his labors: the hunger. For all that the night-sky fascinates and the breezes alive in the grassy pastures may bring delight, there remains a constant sense of hunger—of an appetite never fully assuaged. This gnawing emptiness is no accident of poor planning; it is by design. To be slightly hungry is to be awake, alert. A shepherd who eats his full finds his senses dulled—he becomes more likely to want a nap and that always becomes a hard sleep. If a predator comes, or a sheep gets himself lost, or trapped—or has stumbled into harm’s way, as they always do—the shepherd will be too weighed down to react; his reflexes too slow. One cannot run well with a full belly.

Still, when we bake our breads upon the fire daily, my wish is to add a few fistfuls of flour into the mix; to bake enough bread to fill in the chinks until I am finally sated. When I have tried, always my older brother has stayed my hand. “We have the rations,” I argue, but he shakes his head. “Be prudent and stay prepared,” he says. “Each day we must have bread.”

I hate being a shepherd.
Posted by Province of Meribah at Wednesday, December 18, 2013