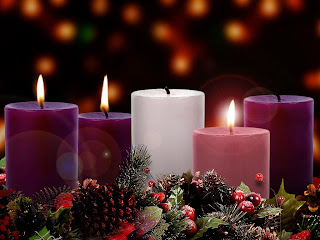 O Come, O Come Emmnauel is one of the great Advent songs. The tune is slow and majestic and "haunting" and thrilling. The theology of the words is impeccable. The song is ancient. . . . and the author is unknown. We have no idea who wrote this. Just some monk sometime before 800 A.D. A time in history we often call "the Dark Ages." Civilization, it seemed, had broken down and mankind was sliding backwards into more chaos, ignorance, pestilence, and unending warfare. But someone, somewhere in a monastery in Europe, penned a song that would reach across the ages to encourage and thrill millions even in the 21st century. Who knew? During those "Dark Ages" the Bible was inaccessible for most people. But the monk who composed this song must have had a full and rich knowledge of Scripture.

The song displays a wealth of phrases from Old Testament prophecies that speak of the coming of the Messiah. He is "the rod of Jesse," the "Dayspring from on high," the "Key of David," and "Wisdom from on high." For the people of the Medieval world who did not have a Bible to read, this was a teaching tool, expressing the hope and truth of Christmas--- the fulfillment of ancient prophecies in the birth of Christ. But how did this tune become so popular worldwide?

In the early 19th century an Anglican priest named John Mason Neale was reading through an ancient book of hymns called the "Psalteroium Cantionum Catholicarum." Rev. Neale easily translated the Latin into English and gave the world a song. Soon his translation made it to England, and from there "across the pond" to America and around the world. A gift was penned by unnamed monks over 1200 years ago. Given a tune by nuns in an obscure convent. Rediscovered by a forgotten evangelist off the coast of Africa.

The song of Emmanuel--- "God with us." Hidden for centuries but now enjoyed by millions worldwide. No one does it alone. God is the One who orchestrates history. And the theme of His song is "Emmanuel." O Come Thou Dayspring come and cheer/ our spirits by Thine Advent here; Disperse the gloomy clouds of night/ and death's dark shadows put to flight; Rejoice! Rejoice! Emmanuel shall come to thee O Israel.

Posted by Province of Meribah at Sunday, December 15, 2013