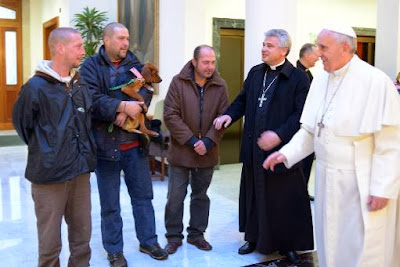 A delightful detail from the breakfast meeting Pope Francis had today with three homeless men (and a dog), from CNS:

As part of a low-key celebration of his 77th birthday, Pope Francis had breakfast with three people who live on the streets near the Vatican. A small dog belonging to one of the homeless men was also on the guest list.

The pope started the day with his usual morning Mass held in the chapel of the Domus Sanctae Marthae residence where he lives.

However, he requested that the Mass be attended by the residence staff “in order to create a particularly family atmosphere for the celebration,” the Vatican press office said in a written statement Tuesday. Cardinal Angelo Sodano, dean of the College of Cardinals, represented the world’s cardinals at the Mass, and Archbishop Pietro Parolin, Vatican secretary of state, attended.

After the Mass, all those present sang “Happy Birthday” to the pope, the Vatican statement said. The pope then met with everyone, including three homeless men who were brought there by Archbishop Konrad Krajewski, the papal almoner.

The archbishop invited the first group of men he had found early that morning sleeping under the large portico in front of the Vatican press hall on the main boulevard in front of St. Peter’s Square, according to the Vatican newspaper, L’Osservatore Romano.

“Would you like to come Pope Francis’ birthday party?” he asked them, the paper reported.

The men, in their 40s, were from Slovakia, Poland and the Czech Republic. They loaded all their belongings in the archbishop’s car; the dog rode in the middle.

When they got to the residence, they waited for the Mass to end, then greeted the pope. Together with Krajewski, they gave the pope a bouquet of sunflowers because they always turn toward the sun like the church turns toward its sun, Christ, the archbishop said.

The pope invited the men to have breakfast with him in the residence dining room, where they talked and shared a few laughs.

One of the men told the pope, “It’s worthwhile being a vagrant because you get to meet the pope,” the paper said.
Posted by Province of Meribah at Thursday, December 19, 2013