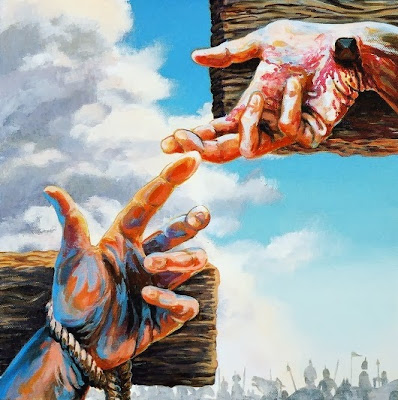 Most people may not realize it, but the feast we celebrate this Sunday, the Feast of Christ the King, is a very new one on the church calendar. It was added by Pope Pius XI in 1925. He created this feast as a reaction against the prevailing attitudes of his day – a way to refute the growing threats of communism and secularism. Two “isms” that sought to make man, not God, the most powerful force in the world. Within a few years, of course, the world would have another “ism” to confront, totalitarianism – making this feast even more significant.

A century later, those threats have been replaced by others that tend to marginalize God—”isms” like materialism or relativism. But here and now, this feast still stands in defiance of our culture. And it stands before us as a challenge.

It asks us: “Who – or WHAT — really rules our lives?” That’s a question we could spend all of Advent asking ourselves, and praying over. And maybe we should.

But today, I want to spend a few minutes considering not just Christ the King – but Christ’s kingdom. Because this feast reminds us what we pray for, day after day, week after week, when we pray “thy kingdom come.”

This kingdom doesn’t have a castle or a court. It isn’t a place of royal fanfare. It isn’t even found on a map.

It is a kingdom that dwells within the human heart.

And its great defining landmark…is the cross.

That is where we encounter Christ the King in today’s gospel reading. In fact, this reading may hit us as a shock. Usually, we hear this gospel during Holy Week. But on this feast, when we celebrate Christ’s triumphant presence in the world, we don’t meet this all-powerful King in a moment of splendor. We meet Him at his most humble — and most humiliated. Stripped. Beaten. Dying on a cross.

Yet, this is part of what we pray for when we pray “Thy kingdom come.”

A kingdom where true power lies…in being powerless.

It is a place where we are called to love, and to give, until there is nothing left.

It is where pure love reigns. And it is in that kingdom where the “good thief” wants to dwell.

This exchange has a unique place in all of scripture. In this passage, Christ isn’t called “rabbi” or “teacher.” In the last moments of his life, someone finally calls Him, simply “Jesus.”

It is the only moment in the gospels where this happens: this is the only time that someone calls him by his given name.

The man hanging beside our Lord speaks to Him as a brother, as a friend.

He talks to him, literally, man to man.

“Jesus,” he says to Him, “remember me when you come into your kingdom.”

Those words, passed down through history, have become our words – the plea of anyone who has ever felt abandoned, or lonely, desperate or afraid. We pray that God doesn’t forget us. And that He gives us, somehow, His grace.

In other words: thy kingdom come.

And Jesus answers that simple prayer: “Today, you will be with me in paradise.” The kingdom WILL come. One man’s faith, at the last moments of his life, saves him. It is something that should give all of us comfort and consolation.

I mentioned at the beginning that this Feast is relatively new to the Church – but what it represents is as old as Christianity itself. A father of the Church, Cyril of Jerusalem, beautifully described how the first Christians received communion, saying that they “made their hands like a throne” to receive the Lord. The very title “Christ the King” has outlasted most of the world’s monarchies. Kings, of course, have fallen out of fashion — there are only about 40 real monarchs now ruling in the world. Most of them are just figureheads.

But the one we honor and celebrate today, of course, isn’t. As Paul describes him today: he is the “firtborn of all creation…for in him all the fullness was pleased to dwell.”

And, this is the one we will greet this morning, with our hands outstretched like a throne.

When I was a teenager, a popular hymn was “The King of Glory.” I won’t torture you by singing it. But I remember the lyrics so well: “The king of glory comes, the nation rejoices, open the gates before him, lift up your voices.”

This morning, on this singular feast, this last Sunday of the liturgical year, we open the gates. We lift up our voices. We stretch out our hands.

And we welcome this King of Glory into our hearts, praying like the good thief: Jesus, remember me, when you come into your kingdom

The Deacon's Bench
Posted by Province of Meribah at Sunday, November 24, 2013